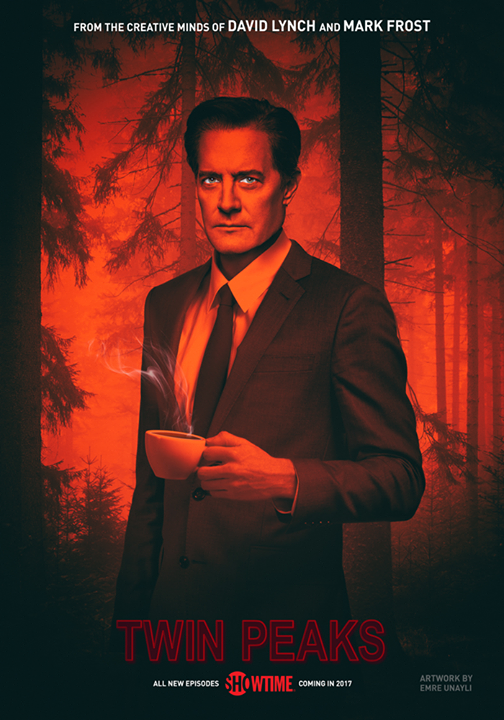 I have been a lifelong fan of David Lynch. It would not be far fetched to say my first viewing of Eraserhead at the age of 17 completely and irrevocably changed my perceptions on what film can accomplish and how deep into the swampy waters of the subconscious it was possible to dive into. So after hearing that Lynch was breaking his nearly decade long silence and releasing a new television series Twin Peaks: The Return, I was pretty damn excited.

Lynch’s work, like any filmmaker, has different periods of subject matter and overall execution. To me, his first 3 films are his masterpieces and will stand the test of time as American classics. Eraserhead with its shadowy nightmare of biology and desire, a movie that defines what a Midnight Movie should be. The Elephant Man is this smog cloaked industrial gothic melodrama, and maybe his most optimistic film, it has a genuine hope for love and redemption for the tragic Joseph Merrick, a truly heartbreaking film. And lastly Blue Velvet, which shines a bright spotlight on the perversity and strangeness of American society.

Then after those early triumphs, Lynch seems to get a bit lost on what he is trying to accomplish and maybe reads a bit to many of his own reviews. Mid-era Lynch almost seems like Lynch trying to create works that he thinks the public expects of him. I include in this period Twin Peaks, Fire Walk with Me, and Wild at Heart. They just don’t feel genuine to me. They are overly humorous, randomly surreal, and seemingly no real intent behind them besides to offer a product to his fans. I am not saying these works do not have their charms or that they are not entertaining, I am saying however that they are beneath what Lynch is capable of.

And now we are in the third phase of Lynch’s filmography. After stepping back from films for a while Lynch unleashed Lost Highway, a flawed masterpiece. The first 30 minutes are some of the most dread filled minutes in cinema history. And the Mystery Man is a genuine nightmare encased in human flesh. The second half of Lost Highway has many great scenes, but falls to the randomness that has plagued a lot of his films. Then he hit us with two absolute masterpieces, Mulholland Drive and Inland Empire. These are both films more about holes in logic and dreams and reality sliding and overlapping into each other until you can not where one ends and one begins. Both of these films are set in LA and Hollywood, and take the slippery nature of films to reality and exposes how nebulous the divide between them really is. Lynch really attacks the viewer's preconceived notions of perception versus imagination and leaves the film viewer in a state of unease and confusion as they leave the movie theater.

And now we come to his newest work Twin Peaks: The Return. At the time of this writing, eight episodes have been released. I am happy to say this is some of the best work Lynch has done in years. In this stagnant artistic climate and troubling political landscape we find ourselves in, Lynch’s direct transgression and surrealism are both brave and much needed. Thankfully Lynch does not care about what the fan expectations of what a new Twin Peaks should be. From the first episode Lynch attacks the viewer and lets it be known, these are uncharted waters. From evil Cooper to the disturbing creatures appearing in the dark, this show is meant to be subversive and disturbing. In no way is this some fun nostalgia filled retread of the original series. And the last episode so far released, the now legendary episode 8, is certainly one of the greatest hours of television ever created. Episode 8 can stand on its own as a short film. It recalls the greats of cinema like Bergman and Cocteau with its sublime beauty of images and penetrating insight into the insanity of the universe we find ourselves trapped in. I can not wait to see what else Lynch has in store for us.
Posted by Scott Dwyer at 9:02 PM 2 comments: