Review: Pornography for the End of the World by Brendan Vidito 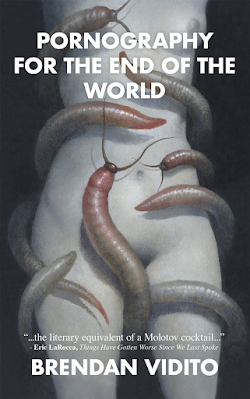 What purpose does horror literature serve? To frighten, to make you turn on the lights and shiver at what could be waiting in the shadows outside? To make you wonder at what sort of strange beings may exist out there in the limitless dark of the universe? To make you look at your own body and feel a sense of vertigo at how alien, how removed you really are from your flesh? Yes and yes and yes. But also horror literature serves as a kind of celebration of the dark, a sort of eroticism of the inhuman and the unnerving. And I do fully mean it when I say eroticism. Are Sacher-Masoch and George Bataille so far removed from H.P. Lovecraft and Thomas Ligotti? Is the exploration of the strange skeletal womb of the derelict spaceship in Alien so far removed from the exploration of so many spread legs of countless pornographic films?

And with this, we come to the intertwined connection of eroticism and horror. And we come to Brendan Vidito’s new collection of horror tales aptly named Pornography for the End of the World. Brendan is a up and coming talent in the horror literature scene. This is his second collection after the also aptly named Nightmares in Ecstasy. Brendan is a connoisseur, and his fiction reads as love letters to the genre he is obsessed with: Horror. You can see all kinds of influences that he unabashedly plays with and explores. Silent Hill. Junji Ito. Hellraiser. David Cronenberg. Ramsey Campbell. All fetishistic names and titles in Brendan’s world. In this way, Brendan follows in a tradition established by such writers as Clark Ashton Smith, Fritz Leiber, and Karl Edward Wager, in experimenting with forms and genres, paying homage and using influence to further the genre, and most of all showing an absolute delight in the pleasures and possibilities of fantasy and horror.

Pornography for the End of the World is a collection of what I can only take to be, Brendan's own cherished nightmares. From the body-changing carnal desires of The Chimera Season with its hints of polyamory and sexual swinging, Mother’s Mark with its exploration of objectification of sexual partners, and Walking in Ash with its fantasies of seeing the death of your loved one, Brendan is not afraid to use the horror genre to explore taboo areas of sex and hunger. Also contained in Pornography for the End of the World are tales of a more dark and pessimistic tone. Apate’s Children focuses on abuse and the ramifications of being an abuser and Glitterati Guignol is a survival horror epic of desperation and fear. And I think the two masterpieces of the collection are The Living Column, an absolute masterpiece of cosmic horror, worm-infested body horror, and an ecstatic delving into perversion, and The Human Clay, a surreal mixture of cum soaked technology and aberrant flesh. This is a pornography of horror in all the best ways. Brendan is fetishistic and obsessive with his love of horror, and I think the brave reader will delight in getting lost in the psychosexual landscapes of Pornography for the End of the World.