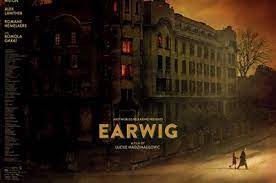 Let me just say it, Lucile Hadzihalilovic is a vastly underappreciated director. She is a true heir to Lynch, Cronenberg, and Kubrick in this era of corporate fast-food cinema. Hadzihalilovic should be in the same standing with horror fans as Eggers, Aster, and Garland. But for whatever reason, her work is completely under the radar. Innocence, Evolution, and her new film Earwig are future cult classics that have not found their cult yet. As original and personal as Strickland’s or von Trier’s films, it’s only a matter of time before filmgoers catch up to this brilliant filmmaker.

Lucile has a new film out called Earwig, that has been doing the film festival circuit and is now available for viewing on some streaming platforms but unfortunately has yet to have an official release on physical media. Earwig is maybe her most abstract work. A master of the slow burn, Lucile’s films trade in mystery and a kind of forever-delayed suspense. Earwig is also her most painterly film, the still cinematography, and silent film bodily expressions are just breathtaking in their beauty. Nothing is ever fully explained in her films, yet the implications are so enticing. As each new film comes out it seems the existential dread increases and increases. Her first film, Innocence, had this kind of dread just simmering in the background. A film that also worked as a subtle form of allegory, societal and gender roles were examined within the maze-like walls of a foster home. In her next film, Evolution, the dread is more in the foreground. A film of body horror, strange births, and hints at some kind of oceanic influence on the human reproductive system. Weird sci-fi mixed with Lovecraftian themes all told in a whisper in a seaside village. In Earwig the dread suffocates everyone and everything. Seemingly influenced by Eastern European film, the film is reticent in its agenda and a certain malignant air hangs over the broken-down post-world war landscape. Also, attention must be given to the score. A gorgeous and hypnotic score by Augustin Viard quietly lurks in the background, enchanting and sublime. 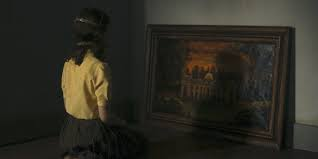 Seemingly set after one of the World Wars, which one is not clear, the film centers on a man, Albert Scellinc, who has been entrusted to take care of a little girl named Mia. Mia is a recluse, living a solitary life with Albert. She has problems with her teeth, a strange kind of contraption creates ice dentures for her, and she never leaves the cavernous house they both occupy. Mia is seemingly lost in dreams, playing with trash and insects, wondering at the suggestive paintings in the house. Albert is a quiet man, who goes through the functions of his duties with quiet resignation. But under the calm, good worker surface, his mind is shadowed by secrets and confusion. Past traumas and private regrets haunt him. He keeps his demons calm by keeping himself busy working and once in a while sneaking down to the local pub to have some drinks while Mia is home passed out asleep. But his secret history ends up coming calling to Albert, and the past and present become confused, and the film starts to loop in on itself, ending in delirium and disorientation. Uncanny strangers and silent watchers haunt a depopulated landscape. The doppelganger and the cuckoo are quietly hinted at. To watch Earwig is to drown into a black abyss of phantastical cinema.

It’s hard to describe a film like Earwig. Its primary concerns are not in plotting and narrative twists but in mood, atmosphere, and ideas. It falls into a tradition of films like Black Moon, Messiah of Evil, and The Tenant, films that are slow burns, that exist in a sort of haze, that star sleepwalkers, and feature deep dives into surrealism and nightmare. A late-night film, perfect for viewing while falling into and out of dream states. All her films are ambiguous, with a certain hallucinatory background noise humming in the background. A cinema for somnambulists. The feeling there is a secret message behind the film that you just can't quite grasp, so you return over and over, obsessed with the mystery. Here is to directors still making difficult work, long may difficult and dreamy cinema live on.