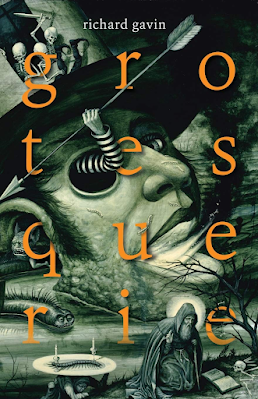 What does grotesque mean? A radical departure from the natural, the expected, or the typical. Absurdly incongruous. Fanciful, bizarre. In Richard Gavin’s new collection Grotesquerie, the book certainly lives up to the name. In this collection Gavin plunges deep into grotesquery, there is a radical deformation of reality in each story. He sets out to corrupt our safe worldview in each story, every time in new and ever more unsettling ways. Characters find out how close pure nightmare is to their day-to-day lives, one wrong step, one horrible decision, meeting the wrong person, and you may wind up in this place of profound dark reality. These are diseased stories, some kind of decay slowly, subtly rising up and by the end, the rot has completely taken over. I would also say this is Gavin at his most murky, and by that I mean these stories feel like drowning in some fetid swamp, water black with lichen and fungus, a swamp that has never seen the light from the sun. Meanings are vague and the stories kind of shift around in unexpected ways. These stories are abstract, diseased, surreal, and disturbing. This collection finds Gavin really going for the throat of his readers, these stories are meant to disturb and to make the reader uneasy. While in past collections his influences may have been more Blackwood and Machen, in this one his influences seem to be more Ligotti and Aickman, There is an insidious underside to these tales. A willful descent into delirium. Desired dooms and erotic anxiety. There is a sexual edge to some of these stories, a descent into perversity and the darker realms of fetish. This is certainly a more edgy Gavin, more of a drive to transgression and perversity than we are used to seeing from him. Grotesquerie may be his most horrific collection yet.

These are tales with ideas behind them, this is intellectual horror in the best of ways. Gavin is exploring a certain worldview. Maybe he is also seeking a kind of salvation in darkness? His dedication to craft and his love for the genre is apparent in each of these tales. What his characters endure, live through, and survive may be dark and horrendous but there is revelation there for those who seek it. There are lessons to be learned, wherever in the lowest pits of hell or in the darkest of abysses, there is knowledge waiting for the adventurous. Gavin is one of the great names in horror fiction today, an absolute master of the literature and a student of the field. And Grotesquerie stands as one of the great works of our era. Here I will touch a little on some of my favorite works of the collection:

Banishments: which opens the collection, is a legitimate descent into nightmare. As the tale goes on it goes deeper and more intently into the realm of the surreal and the nebulous. This story never allows you to gain your footing and just when you think you know where the story is heading, Gavin twists the narrative again, leaving you lost in shadow and darkness. This is a tale of a coffin. A coffin containing a decayed and diseased form floating in a post-disaster flooded river.. The coffin lands on the black earth. The inverse of birth. A strange new kind of emergence presents itself.

Neithernor: One of the weirdest stories I have ever read. A tale of a man looking for a present for his wife and the strange art… and artist he discovers. Written for a Robert Aickman tribute anthology, this tale shares Aickman’s reluctance to make his subject matter obvious while also taking Aickman’s subtle perversities and amping them up. One of the things the stories delight in, in Grotesque, is leaving the reader in darkness and confusion by the end, and this tale shares that perversity.

Scold’s Bridle: A Cruelty: an absolutely delicious tale of torture devices, bondage and discipline, and desperation, all told in a subdued way, undercutting the debased subject matter. A rare horror tale that actually succeeded in pushing the edge and is genuinely shocking. This story stands out from the collection also for being a non-supernatural tale, almost a conte cruel of fetishistic dark erotica.

After the Final: One of the greatest “tribute” stories I have ever read. This one was written for the Grimscribe’s Puppets anthology dedicated to the master of the horror tale, Thomas Ligotti. And I would be hard-pressed to think of another tale that so delves into a writer's work and works as this obsessive and dark love letter to the work of Ligotti. Full of subtle homages and directly engaging with many of the themes you would find in Ligotti’s work, Gavin is obviously a student and a fan of his and you can tell with the love and the care that went into crafting this tale. Just an amazing story.

The Sullied Plane: Horror erotica at its finest. Imagine Kubrick’s Eyes Wide Shut, in its sexual frankness, meets Carpenter’s In the Mouth of Madness, in its atmosphere of weird tentacled beings, things made of shadow, lurking just out of sight… but told in a whisper. Strange and secret couplings may or may not be happening behind the scenes of a family New Year's Eve party.

Crawl Space Oracle: A tale of users and being used. Also, there is a slight hint of cuckoldry hidden in the background. A tale of a woman who connects with an old friend to try to get some financial advice, only to have the tables turned and for her to be the one to be of use.

I highly recommend Grotesquerie to anyone who loves great horror fiction. Grotesquerie both pays homage to the long tradition of horror fiction and blazes new trails, creates new forms and new directions for horror to take. I would say this volume stands with the best works to have come out in this new era of horror. Grotesquerie, alongside Brian Evenson’s The Glassy, Burning Floor of Hell, Nathan Ballingrud’s North American Lake Monsters, Adam Nevill’s Wyrd and Other Derelections, Samantha Hunt’s The Dark Dark, and Augustina Bazterrica’s Tender is the Flesh, all stand as a new corpus of horror literature for the 21st century.