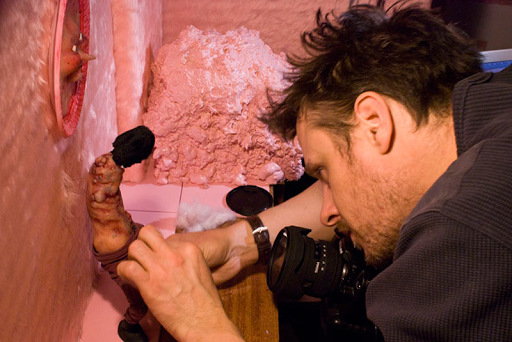 Today we have one of the great artists working in film today, Robert Morgan! A stop motion filmmaker, Robert Morgan has created some of the most vital and important works of the modern era. Some of his masterworks include The Separation, The Cat with Hands, Bobby Yeah, and his D is for Deloused was in the horror anthology film The ABC's of Death. He has also directed a couple of masterful shorts that pay tribute to some of the great horror films, you can find his Belial's Dream short on the Basketcase Blu Ray and Tomorrow I Will Be Dirt on the Schramm Blu Ray.
Plutonian: Hello and thanks for stopping by The Plutonian! It is a true honor to have you here! Stop motion animation has to be the most obsessive style of filmmaking. Normally making a film involves dozens, if not hundreds, of contributors, but stop motion is a solitary, detail-oriented, and extremely personal artform. Manipulating puppets and creating scenery and sets in private is a mysterious and fetishistic thing to do. What compelled you to want to become a stop motion filmmaker?
RM: I came from an art background so I was always used to making things on my own. Doing a painting or a sculpture does not involve a whole team, so I was used to expressing myself in that way. I never had a burning desire to be an animator, but I did want to make films. Coming from an art background, it was a simple step to make those paintings or sculptures move, rather than having to find a whole team to work with. So I applied to do a degree in animation. And when I started doing stop-motion, I found that I had a natural affinity for it. So that was how I started. I never had a compulsion to make animation in particular though. I really see it as an extension of what I was doing when I made paintings and sculptures, except in a time-based form.
Plutonian: A lot of your work has to do with mutations of the body and the infinite variations of the organic form. Bodies explode into different shapes, animals have mismatched limbs, and different realities exist within bodily orifices. It is all a sort of a surrealism of the body. How do you view the mutating body and the quivering flesh sacs we call life?
RM: I see it as exactly that – as a mass of weird, quivering flesh sacs! Existence is a pretty weird and mysterious thing when you think about it. And if you think about it too much it can become really quite disturbing. I totally understand people like Thomas Ligotti who see life as fundamentally uncanny and weird. And we’re always changing, physically and mentally. It’s all just one big constantly transforming march towards non-existence. Hopefully, you can have some fun along the way. Also, I had really bad acne when I was a teenager so I was acutely aware of physical mutation from quite early on… I think it definitely had an influence on my films. 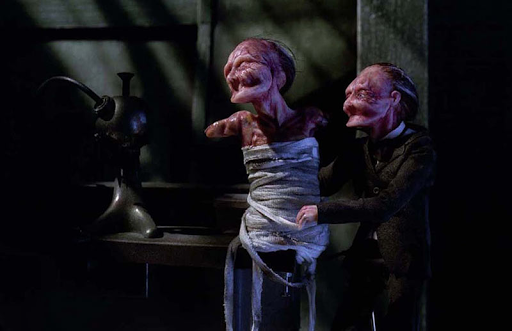 Plutonian: The history of stop motion animation is a truly fascinating and under-discussed topic. What would you say are some of the most important works in the field of stop motion film? What are some of your personal favorites?
RM: Most people think of very twee things when the word stop-motion is mentioned. For me, it was always a dark, uncanny art form though. And the process itself always felt obsessive and ritualistic to me. The real art of stop-motion is very rarely discussed in the mainstream world. It’s all just “oh wow it’s so painstaking” and that’s as far as it goes. But the history of stop-motion is full of amazing pieces of art that should be more widely known. I guess people know about Jan Svankmajer and the Quay Brothers, both of whom I’d definitely call important. Also, there’s the films of Ladislaw Starevicz and Charlie Bowers, who made some beautiful films early on. Plus I always enjoyed seeing bits of stop-motion in live-action films, like the stuff in Basket Case, Fiend Without a Face, Tetsuo, etc. That stuff is just as important to me as the more highbrow classics.
Plutonian: I think it could be agreed that stop motion, as an art form, is better suited to the short film than the more traditional feature-length film. Most stop motion feature films are live-action films with some stop motion sequences thrown in. I mean, there are feature-length films like Tim Burton’s The Nightmare Before Christmas that use zero live-action, but his films come off to me as too slick and produced. There is something about the shaky, low-budget, off-kilter quality of stop motion that Tim Burton just misses by miles. Take for instance The Quay Brothers. The Quay Brothers are definitely geniuses in stop motion and their short films are classics. But I feel their motion-length pictures miss the feverish inspiration and occulted beauty of their short films. Institute Benjamina is a wonderful film, but the little doses of stop motion don’t really add much to it. The Piano Tuner of Earthquakes to me had really interesting ideas but fell flat in execution. I think there are stronger uses of stop motion sequences in Lynch’s Eraserhead and in Tsukamoto's Tetsuo: The Iron Man. But of course Svankmajer’s film Alice is a masterpiece of the form. You have done some work with live-action filmmaking in addition to stop motion. What do you feel about feature-length live action/stop motion hybrid films?
RM: I would agree with your opening statement about feature-length animation in general. I’ve very rarely seen an animated feature film of any kind that I liked. Maybe a handful. But I’ve seen amazing short films. That’s where the real masterpieces of animation are found; in the short form. I also think it’s difficult to get funding for really interesting animated features because there’s a bias towards them being broad, family films, at least in the West. Personally, I think the idea of mixing live-action and stop-motion animation in a feature film is a more fruitful one (I’m developing one of my own). I think there’s a nice gray area between the forms that is under-explored. I think the quality of the finished result is a question of artistic execution rather than a problem intrinsically to do with mixing the forms. I love Institute Benjamenta but I agree Piano Tuner was not as good, but from what I know, I think that was more to do with outside pressures from financiers than anything else. 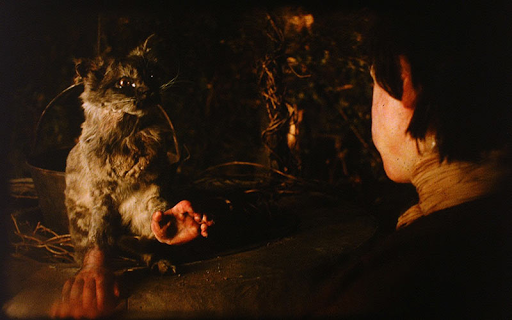 Plutonian: It seems your filmography is moving from a more traditional brand of narrative storytelling ( The Cat with Hands, The Separation ) to a more gonzo attack of surreal delirium and transgressive humor ( Bobby Yeah, D is for Deloused ). Would you say that is a fair assessment? Could you talk about your growth as a filmmaker and how what you are trying to achieve with your films has evolved?
RM: That’s just the way things have gone with the last few films. I’m not particularly moving away from more traditional forms in a bigger sense. I’m developing a couple of features that are a bit more traditional, for example. I think when you work alone, like with Bobby Yeah and Deloused, there’s just a certain insular quality that comes out. I’d ultimately like to be a fairly rounded filmmaker who has made lots of different types of films, all with a similar sensibility maybe. But when I’m making stuff on my own, I need to keep myself entertained, which is why I guess they’re so far out.
Plutonian: Can you talk about your process? Do you have a finished film in your mind you try to recreate? Or do you perhaps have a more experimental ‘play it by ear’ approach?
RM: It depends on the project. Sometimes I’ve done the whole traditional process of writing a script, gathering a production together, working with collaborators, etc. Other times, it’s just me in a room, and in that case, I’ve quite enjoyed just playing by ear recently. Bobby Yeah was not planned in any way, just improvised from start to finish. Deloused was similar, although I had a rough treatment. The joy of stop-motion is that it very often takes on a life of its own once you start animating. It tells you what it wants to be, so you need to be open to following it, and then it can lead to some really weird and interesting places. I enjoy both processes though because collaboration also brings lots of amazing things too.
Plutonian: What do puppets offer a filmmaker that they can’t get from a flesh and blood actor? What do puppets mean to you? Can you talk about what goes into creating a character who is a puppet?
RM: It’s just a whole different type of expression. An actor needs to make it real on some level. But puppets are metaphors. They’re objects that the audience projects human emotions onto. So they exist on a different plane of non-reality. They don’t have to be credible in any way. They can be incredible. The way I build a puppet character is to start by sculpting it. And in sculpting it, I’m looking for a demeanor or a facial expression that holds an emotion of some kind; or that can seem to hold multiple emotions, the more complex the better. Once I’ve got that demeanor that interests or fascinates me, then I know that puppet can carry a film.
Plutonian: Do you have any upcoming projects you would like to talk about? Where would you like to see your artistic career head in the future?
RM: Where I’d like to see my career go is one thing, where it actually will go is something else! But I’ve gota few projects floating around at the moment. I’m just starting a new short that will come out later this year; it’s connected to a well-known cult film, but I can’t say too much about it right now. It will be revealed in due course. As for other projects, I don’t like to say too much about them in case they don’t happen. But there’s definitely some plans afoot!
Posted by Scott Dwyer at 6:00 PM