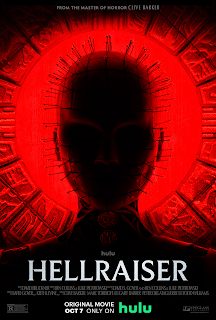 Hellraiser and Hellbound: Hellraiser 2 are titans in horror cinema. Absolutely game changing and taboo breaking. Dealing head on with a abysmal sexuality, the desire for the grotesque and the forbidden, and the masochistic love of what harms us, Hellraiser has never really been equaled since its release. But unfortunately there have been years and years of bad direct to video sequels that are just literally worthless. So when news of a new Hellraiser was announced, with a promise to try to be a worthy film that would stand with the first two, fans were understandably excited. Fans have long been eager for a Hellraiser to return to its proper form, rescued from low budget quick cash ins of the franishise. The announcement of a new Hellraiser, one helmed by David Bruckner, who seemed to have a lot of respect for the material, and the teaser trailers quickly spread all over social media. The question then arises… is this new Hellraiser a worthy extension of the series? The short and quick answer is regrettably, no, but not for lack of trying.

This new Hellraiser focuses on Riley, a young troubled girl who juggles a drug addiction with asperations to try to better her life. In a little scheme to steal some rich persons stored away treasures she comes across a mysterious puzzle box, and is lead down some dark paths. The film features schemes within schemes involving a reclusive billionaire collector and a shady bad boy boyfriend, and its up to Riley to solve all the puzzles and survive the traps set for her. One of my first criticisms of this film, is how much the main character just is not entertwined with the box, all she wants is to get away from it and free her loved ones from ir. In the original Hellraiser and Hellbound, the siren call of the box kept bringing the characters back. All the characters, even if they didnt fully want to come to acknowledge to themselves, secretly or not so secretly, desired the perverse touch of the Cenobites. In this new one, the Cenobites are just monsters to escape from, nothing more.

And therein lay one of the problems of this film. It is almost presented as a caper that went wrong, with the characters trying to get out of the bind that they find themselves in. In the original Hellraiser the film focused on a family and the diseased desires that lurked underneath the fake smiles of family life. It dealt with disappointment, suppressed desire, and the urge to escape the vapid day to day life of its protagonists. In this new film it makes a big deal of the main character being a drug addict. But then does nothing with that plot thread and just kind of forgets about it. It would have been an interesting film to deal with the desire to escape through drugs and how that relates to the desire to escape through sex and perversion. How the Cenobites would have zeroed in on her addictions and made her explore the pleasures and pains of addiction and delirium. But that is not the film we get. It is like they only gave her “issues” to make the audience feel for her, which just does not work and isn't needed. The film develops characters for about ten minutes then turns into a figure out how to escape the monsters thriller. And it all just feels flat. And the ending is kind of laughable. Riley just… chooses to walk away? That’s it? In the original films, once a boundary has been crossed there is no going back to normalcy, there is a price to pay for transgression. Here you get to pick your prize, or just leave.

Well if the plot in unengaging what about the stars of the show? The Cenobites? Sadly they are a bit underwhelming. You can see that the creators of the film tried to create something that could stand next to the wonderfully perverse designs of the original Cenobties. Except these new Cenobites seem to be both so exaggerated to be too unrealistic to affect the audience and also wooden and just with no life in the actual execution of the look of the Cenobites. The makeup and costumes the actors wear just seem strangely plastic and fake. The designs of them are actually a bit interesting, but unfortunately fake and unconvincing. And the director really does nothing to set up the Cenobites, no operatic entrance like the grand appearance of the Cenobites to Kirsty in the original film. They just kind of… show up. I remember watching Barker’s Hellraiser and being wowed by the Cenobites, and wondering what dark tortures they had went through, what diseased perversions run through their blood, and what designs they had for the solvers of the box they took across the divide with them. The new Cenobites? Oh hey they are kind of cool I guess, and then literally forget about them as soon as the film is over. 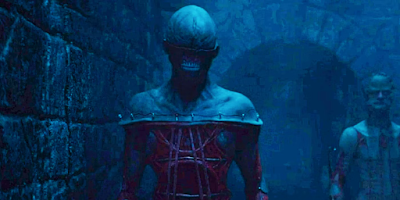 Other problems. The score has occasional rifts on Christopher Young’s score but never does anything to assert itself. There are multiple plot points that are just laughable. Anti-Cenobite fence? Yes that is really a thing in this film. The unasked for overhaul of the mythos. They portray the Cenobites as kind of game show hosts, presenting different prizes to choose from for who ever solves the puzzle box, is interesting if this was a different film, but does not quite work for the Hellraiser mythos. I feel the original’s notion with the Cenobites as explorers and experimentors in flesh and desire, and when you summon them, you have no choice but to go over the divide and taste their pleasures, opening the puzzle box a willful act of submission to outer powers, is much more evocative. And most fatally, the film is just not erotic or pervy, the kiss of death to a film that wears the Hellraiser moniker. The film is dry and bizarrely undaring. There are no taboos explored, no edges being crossed. This new Hellraiser does have a couple good points, the recasting of Pinhead, performed with a subtle menace and a sadistic glee by Jamie Clayton is a stand out performance. You can tell the creators do respect what Clive Barker created and tried their hands at creating a interesting extension of the Hellraiser mythos, but it just honestly missed the mark. Its a brave failure. It is faint praise to say this is the third best Hellraiser film after the original Hellraiser and Hellbound, but it does not really have any competition. Barker’s Hellraiser and Hellbound were dirty fairy tales, fairy tales about fucking and the shedding of skins revealing the meat and sinew underneath the surface. Obsessive and daring, those films left a rather pleasant scar on its audience, luring them to return again and again to its self created mythos. This new Hellraiser, despite its best intentions, it just another Hollywood style horror thrilride, sometimes enjoyable while you are on the ride, but instantly forgotten as soon as you get off.