Review: The Glassy, Burning Floor of Hell by Brian Evenson 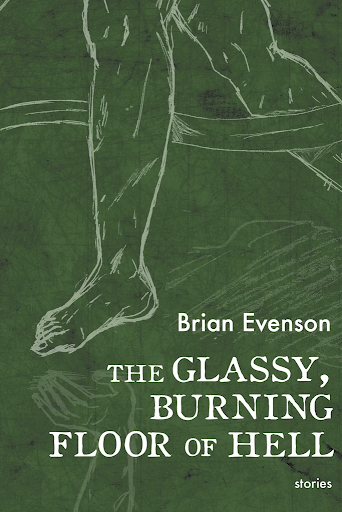 A man who can not tell if the horses he sees laying in a stable are dead or alive. A woman who finds herself trapped in strange dreams, maybe with a new parasitic leg. A man seeing a psychiatrist, only to be treated by two, hoping at least one is real. A man, fallen into a hole on some distant world, being taken over by some alien thing. A little girl who has no face, no matter which way you turn her. In the old west, a man on the run meets a stranger, who isn’t what he seems. These are some of the visions that you will encounter in Brian Evenson’s work. His latest collection The Glassy, Burning Floor of Hell is the third in a trilogy of new horror collections of his work from Coffee House Press. The first two are A Collapse of Horses and Song for the Unraveling of the World. These three volumes are essential reading. They are as vital and innovative as Barker’s Books of Blood or Ligotti’s Teatro Grottesco. To take comparisons further, Barker’s work brought to the field tales of perverse passion and eroticism, Ligotti brought a macabre gothic pessimism, and now Evenson brings this cold speculative fiction, almost a deliberate postmodern fixation on themes of identity and the nature of reality. If Barker found influence in pornographic literature, and Ligotti found influence in Eastern European literature, it would seem Evenson finds influence in 1970’s speculative fiction, maybe you could say the child of Harlan Ellison and Jorge Luis Borges if Ellison focused more on horror fiction, or Borges’s writing turned to nightmare.

There is something extremely unnerving about Brian Evenson’s horror fiction. Something maybe almost unique. I would say in terms of effectiveness only Thomas Ligotti stands in the same category. Not just the ability to write an effectively disturbing story, but to actually change the reader's perceptions. To contaminate the reader's worldview. These kinds of work, in a literal sense, wound the reader. How to describe Brian Evenson’s work? Take a classic weird tales story, and in the background lace the tale with weird new-wave science fictional elements. Then use these tropes to reveal certain uncomfortable ideas to the reader. The reveals: you are not what you thought you were, you are not even you. Your sense of self, your sense of identity, your sense of bodily integrity are all questioned. He undermines you, in the most understated and creeping way. In the middle of a story you realize you are not sure where you are, the story is starting to spin out of control and you have no idea where it, or you, will end up. In reading the best of his works, the reader starts to feel a real danger, like Evenson is somehow really going to do some kind of permanent damage to their psyche. Some of his stories work in loops, ending where they began, some of his works have these strange breaks at the end, where you are left lost and disoriented. It’s like being shown what it is like to live in a schizophrenic mind or to live with strange obsessions, and then to be left there, the story has changed you, twisted you, corrupted you. He lures his readers in with subtle mystery, then contaminants them with his insidious visions. We come to his stories to be disturbed, to be unsettled, but as we dare ourselves to go into the dark waters of Evenson’s tales, we realize far too late maybe we have gone too deep into the water, and now we can’t escape the pulling tide.

In this new collection, The Glassy, Burning Floor of Hell, I would say some of my favorites are: Myling Kommer, a tale of dark family secrets and resentments. There is this just slow accumulation of dread, an uncertainty of what is happening, this pitch-black darkness seething between the words, with an ending that will haunt you long after you put the book down. A Bad Patch, written for a David Cronenberg tribute anthology, this story of parasites and body horror does the master horror filmmaker justice and is one of the best tales Brian Evenson has written. And finally, what may be my favorite tale in this book, the title story The Glassy, Burning Floor of Hell. This is one of those works that only Brian Evenson could write. A twisting labyrinth of a story, this is one of those tales that leave you unnerved, wondering what you had just read and how the author pulled off what he did. A woman goes to a self-help seminar, only to become troubled by strange dreams and a strange alteration to her body.

All three books of this trilogy explore and expand on what can be done in horror literature in new and surprising ways.  A Collapse of Horses is a collection that explores delirious/surreal horror. It has some of the most shocking and unsetting tales I have ever read. Song for the Unraveling of the World finds Brian Evenson more in a kind of science fiction or maybe speculative fiction mode, using the tools of those genres to further refine his methodology. The Glassy, Burning Floor of Hell in a way is a return to classic form. It plays on traditional horror tropes but uses them in unexpected ways, twisting them into new visions fit for an era where we find ourselves living through some very strange times. But all three collections have a plethora of different styles, genres, and tropes. So when I talk about overarching themes, I mean this in the most general sense. You will be hard-pressed to find a writer with more range and skill at different modes of storytelling than Brian Evenson. It’s hard to just talk about The Glassy, Burning Floor of Hell as it would be to just talk about one of Clive Barker’s Books of Blood. To my mind they form one work, the stories informing each other in interesting ways. I think Brian Evenson is one of the most vital and important writers working in horror today, and his work deserves all the accolades it can get.