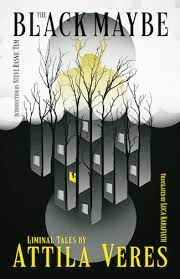 Continuing our focus on Valancourt Press and their line of international horror literature, we now come to Attila Veres’s The Black Maybe: Liminal Tales. Another collection that sprung from the success of the first volume of Valancourt’s Book of World Horror Stories and the brilliant tale from Veres that was contained within, The Time Remaining. Valancourt has been releasing some major collections making their English language debut, and The Black Maybe is deserving of being called a major event.

In The Black Maybe there is a mix of some genuinely creepy horror tales and stories that lean into more dark fantasy. His stories mix this chilly folkish rural feeling with a hint of post-Soviet occupation paranoia. His prose is crisp and elegant. His characters are fleshed out and believable. And his horrors are the kind that doesn't go away at the coming of dawn. His stories take place in this kind of dark eastern European country of horrors. A land of strange growths in the fields and lurking shadows in the corners of your bedroom. For his characters, a kind of dark knowledge awaits to be discovered, or relearned, by them. There is a realization of the hidden traumas the character was overlooking. Things will not turn out how you think they will. You don’t realize the pain and the darkness hidden by your seemingly happy life. And all these hidden traumas erupt into the character's reality, disrupting their lives and corrupting them forever.

I do confess a bias towards a more realistic form of horror than the more fantastic/fantasy forms of horror fiction. And this collection seems to be split about half and half between realism and fantasy. And what I mean by these terms is in realistic horror, the story takes place in a world we identify as our own, and something infiltrates or contaminates the protagonist's reality, whereas horror in a more fantasy vein takes place in a world that is not ours and follows rules that are not the rules that govern our day to day world. I do feel his realistic horror is his strongest ( and don’t let me misrepresent these tales, even his realist works end up in some very strange places indeed ) but for lovers of more abstract or fantastic horror, this book is very much for you. His horror fantasy tales are gorgeous and surreal and are at the forefront of such work being done today. A mix of folk horror and fantasy, these are strange stories that have few relatives in English horror literature but are deeply rooted in central and eastern European fantastic literature. I would say his realistic horror does show some influence of Campbell and Ligotti, both of whom also drew influence from eastern European literature.

The story that wowed readers in the Valancourt Book of World Horror is The Time Remaining. And it remains just as strong on a reread. The Time Remaining is a tale of creeping dread with a whiplash kind of ending. A mom gaslighting her child into believing his dolls are dying, with the intention of getting her kid to get rid of such silly toys so he can grow up to be a more mature young man. So the young boy starts seeing his dolls actually becoming sick and falling apart. He tries his best to fix them, becoming an expert in doll surgery. Yet his mother has more revelations in store for him. In the Snow, Sleeping is a tale about a couple that goes on a vacation, meaning to get some rest and enjoy each other's company. What happens is a descent into pure nightmare. Fears of commitment and intimacy follow them on their vacation, and outside forces come to show the true blackened heart of their relationship. To Bite a Dog may be his best work. It's the work that is most restrained, and it may be his most idea-driven. Something, or someone, is attacking dogs at the local park. And a man strangely comes to suspect his lover may have some kind of knowledge of what is happening. And again here we have a strange kind of revelation in store for the main character. To Bite a Dog is a very unique tale, a story that raises some interesting questions and has really fascinating character dynamics

The second half of the book falls more into a dark fantasy direction. Strange beings and weird small-town rituals, these stories are like perverted fairy tales. Here his prose is sharp, characters realistic, in contrast to the dive into delirium and strange realities these tales take the reader on. Post-soviet era towns, dark impenetrable forests, a feeling of underlying paranoia, and a seething nightmare world found to be hiding behind what we complacently call the normal world. In stories like Return to the Midnight School and The Black Maybe, something rotten has taken root in the soil. A past that can not be hidden in the closet. Something that infects life. The corruption has not gone away, it has just been hidden, waiting to erupt. He draws on strange myths and the darker side of classic fantasy tales, yet has a very modern writing style and purpose to his fiction. Here his characters dwell in this place of diseased fantasies, a kind of putrid never-never land.

The Black Maybe and its author Attila Veres bring an exciting new voice to the horror field. Seeing both the homegrown horrors of his native country and the subtle influence of western horror literature makes for a fascinating read. He shows new paths for horror to take while furthering the tradition of horror in literature. This is a remarkable achievement and another example of the great work Valancourt is doing in bringing these important and remarkable non-English works to an English-speaking audience.

Posted by Scott Dwyer at 1:31 AM No comments: