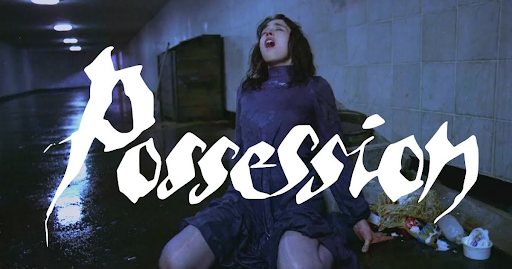 Possession. A film of shrieking furies, slimy reeking perversions of the human form, eerie doppelgangers, inhuman eroticism, exploding human psyches, and an out of control drive towards self-annihilation. Possession draws into itself both the director’s, Andrzej Żuławski’s, anguish over his disintegrating marriage and also the lingering trauma of a post World War Europe. Shot in West Germany during the cold war when it was a county cut in half by a literal wall, a nation deeply divided. And Zulawski was a Polish citizen self-exiled from his own country over the controversies surrounding his artistic output resulting in bannings of his films. Zulawski was walled off from the place he knew as home. In a way, you can say that Possession itself is a film about walls. The walls between each person's private life, the walls that separate us from the lives we wish we had, the walls that make us unknowable to each other. Possession is also about the rage that comes from trying to break through the various walls and never being able to. About the rage at being a trapped animal in a labyrinth beyond comprehension. Possession is about learning to live with monstrous truths and about the way desire can have disturbing outcomes. Anna and Mark are in the midst of separating, Mark does not want this, he does not want to be cut off from his relationship and his child. But Anna is suffocating under the relationship, she desires a way to find some kind of meaning, some kind of transcendence. Mark tries to understand the suffering Anna is going through, he tries to feel the pain she feels. But she is done with him and finds his attempts actually insulting and invasive. Mark wants to show her his love for her by showing her his willingness to push himself to the limits of self-destruction, Anna wants an escape from the traps of human desire. What she wants, we find out, waits in the dark shadows of an empty run down apartment, something slithering and slimy and erotic and not human. 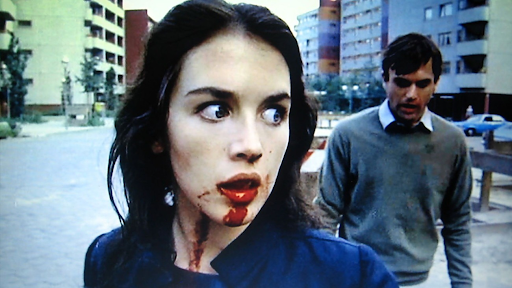 The separating wife and mother, Anna, absolutely owns this film. Everything else in this film is a barrier for her to smash through. She is a vortex of anger and rebellion.  Anna both figuratively and actually, confronts the inner beast of her nature, the inner vortex of anger and desire and pain. She would rather make a hell out of her family than be trapped by something she despises. Anna is almost akin to a vampire, flying through the scenes in various capes and using and destroying men in her search for meaning. Her face is often covered in blood and her eyes are searing through the film screen at the viewer. Mark seems to be caught in her wake, utterly in love with her and willing to be a victim to her madness.

But viewer be warned, hidden in Possession is maybe the most disturbing… thing, I have ever seen in a film. The thing in the apartment. Slimy, tentacled, and phallic. Just resembling a human form enough to be disturbing, it is a mockery of humanity and a corrupter of sexuality. It lurks in the shadows, moving slowly around leaving a trail of mucus much like a snail. Its head is a phallus with no face. And it is Anna’s secret lover. It lurks in the dark corners and in the bedsheets, and it exists to fuck. This… thing is the closest Anna gets to finding some kind of happiness in this diseased world. Created by Carlo Rambaldi, the special effects artist who also did work on Alien and E.T., it seems like something that just stepped out of some insane nightmare of sex. 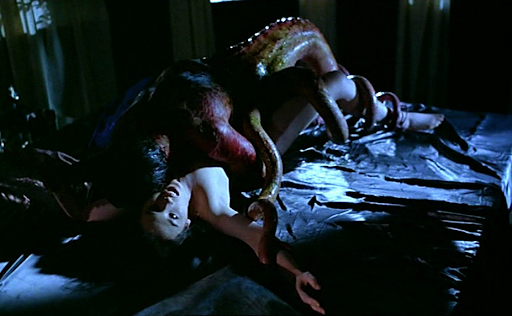 Throughout the film, there is a theme of doppelgangers that subtly pops up and then increasingly takes over the film. The strange not quite right doubles of people who we think we know. A doppelganger of Anna appears as a school teacher, a soft and submissive dream version of Anna. And towards the end a doppelganger of Mark appears, erotic, independent, driven, the opposite of over clingy codependent Mark. The film ends with him, the Mark doppelganger, trying to get into the house, visualized like the shadow of a giant insect flitting around the front door window. trying to get back into Mark and Anna’s apartment, with their child and the doppelganger of Anna hiding inside, frightened to answer the door. And over the audio track, bombs start falling on the city. A repetition of trauma, a cycle of violence? It is interesting that the film ends with the main characters doubles essentially about to replay the drama of the film, only now with the world crashing down around their heads. Chaos and war break out and the film fades to black. Leaving everything in some kind of maelstrom of unmeaning. Possession is the most pessimistic of films, there is no center to hold on to, no meaning to try to understand. Everything rots and falls into ruin. The characters shriek into the all-consuming void surrounding their lives. It seems to say in the face of a loss of meaning, the only avenue a person can find for action is violence or sexual perversion.

So, what is the “possession” of the film's title? To Mark, it would seem the confusing and random acting out of Anna, like some demon has taken control of her. To Anna, it would be Mark trying to suffocate and dominate her life. To each other, they must seem like demons. In the conventional view of relationships, people tend to believe that both partners should be trying to elevate each other, be positive influences for each other. But in Possession relationships breed madness. The film’s title may refer to the walls society puts around us, trapping us in relationships, jobs, social conventions, trying to possess us body and soul. But Possession also means the demon that can erupt from inside us, a side of us that only emerges when our lives and our sanity are in danger. And this demon will batter itself against the walls surrounding it, trying to get free,