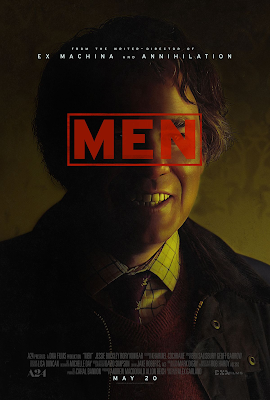 Men, directed by Alex Garland, seemingly came out of nowhere, a bit of a teaser trailer but that’s it really for promotion. His previous films, Ex Machina and Annihilation, showed promise as a director of real vision, an intellectual director with things to say. And now his new film Men is out, and I think with Men he has delivered his most personal and most accomplished film yet. There are also virtuoso acting performances from Jessie Buckley playing Harper and Rory Kinnear playing every man in the film, and a genius soundtrack by Ben Salisbury and Geoff Barrow. The film centers on Harper, a woman hurting from a recent disastrous breakup with her husband. He threatens to kill himself after she tells him she wants a divorce. He then seemingly falls ( he may have purposely jumped ) out of a window above her apartment, landing on a fence, splitting his arm in two, and bleeds to death right there on the sidewalk. An emotionally wounded Harper rents a house in a small out of the way village to get some air and some mental space. The house is gorgeous, surrounded by a vast forest and beautiful countryside. But while she is trying to get some distance from the trauma of the breakup she keeps running into these strange random men. They start off lurking around her, in the background, but then they start to assert themselves more and more into her life. They seem to hold some kind of bias against her, they all want to either want to degrade her or imply that she was at fault for her ex-husband's death, even though she has never met them before and they really shouldn’t know anything about her. They range from openly accusatory, to insultingly dismissive of her. And the threat of the men just keeps increasing to the point of them stalking her at her house and then trying to break in. The first half of the film is a masterwork of tension and slow-building dread. Then in the second half, the film escalates into just insane body horror and maybe even a nebulous undercurrent of cosmic horror. A lot of films falter at such a transition but the film’s logic is solid and earns it. What follows is a closer look at the film and does contain spoilers.

All the men in the film are played by Rory Kinnear, all of them insidiously threatening to Harper and somehow all related in their disdain of her. Having the same actor play all the men certainly adds a subtle hallucinatory quality to the film that just increases its nightmarish feeling. From implying that she should have just given her ex-husband a chance to apologize after he was physically abusive to her and, that it may in fact have been her fault he died, to policemen dismissing her as paranoid when she complains of a naked man stalking her outside her rental. The men are an utter delirium of toxic masculinity. Towards the end they start to seem to have a joint purpose and even share the same wound after Harper cuts one down the length of its arm, splitting the arm in two, which is also the same type of wound her ex-husband died from. All the scenes of the men subjecting themselves on Harper have this creeping intensity and are just dread-inducing sequences. 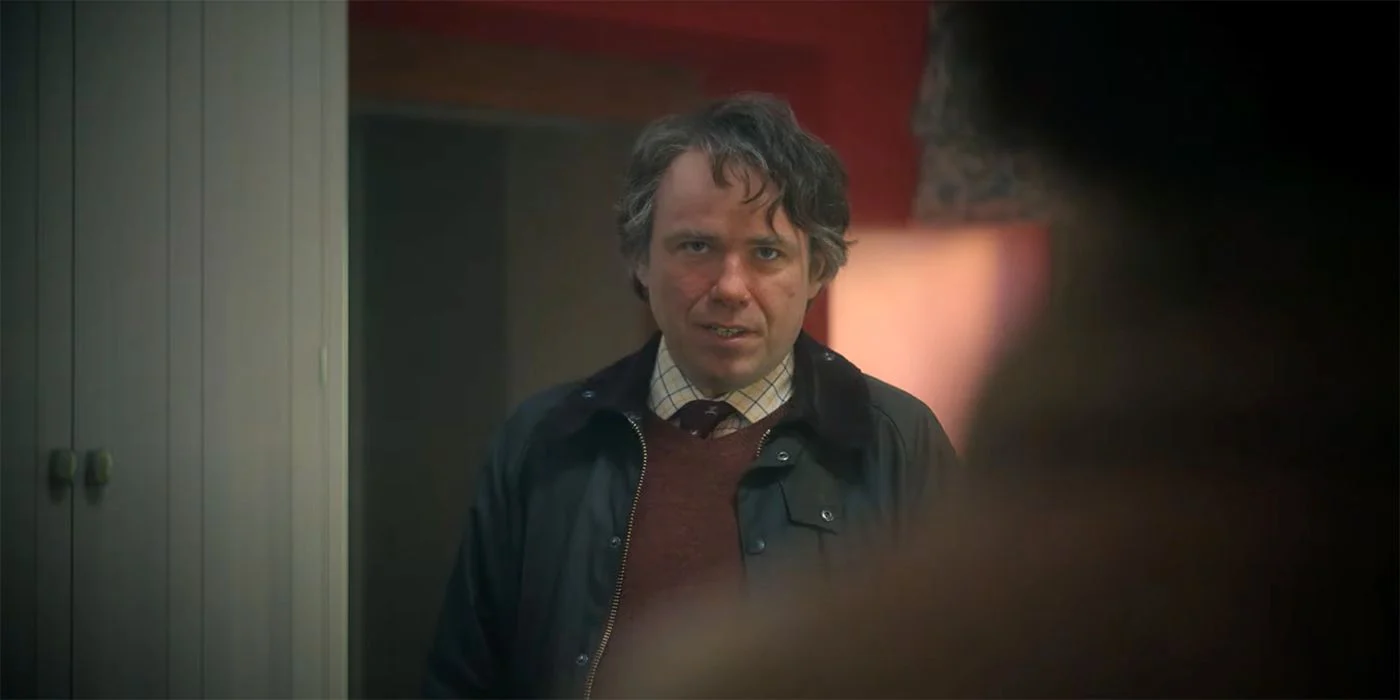 The film overtly is about the horrors of relationships and desire, after all, what is more strange than the person sleeping in bed with you? Seemingly a nightmare of brutish men that seek to control and manipulate in the name of love. While toxic masculinity is one of the main themes of the film there is an undercurrent of a differing interpretation. There are underlying hints, easily missed, that there may be another side to the story. Is Harper as innocent as she seems? Between subtle lies she tells to the pointed avoidance of any details of her and her husband's relationship before the breakup, the film pointedly does not fully back up the men as monsters thread, not fully anyway. What if the recurring men of the title actually are externalized figures of her subconscious? The film is both so allusive with its intentions and so over the top with its aggressive imagery you could make the case that maybe Harper is an unreliable narrator and the film is shown from some dark side of her perspective. Maybe she had actually wanted her ex-husband to die and the film is a projection of her tormented psyche? If you said that the film is actually about Harper in some way intentionally killing her husband, and the film centers on her fleeing from the externalized regret and guilt, personified as the monstrous, nothing about the film would have to be changed. The film allows both a reading of a woman tormented by a corrupting masculine force, but also hints that a woman's sexuality can torment and manipulate a man, to the brink of destruction and breakdown. Where the film shines is in its examination of human relationships and interactions, at their most nightmarish, and is brave enough to be unsparing in its focus.

At the end, the men are shown to actually be pathetic and degraded, pleading with Harper to take him/it back. The men/thing seems powerless before her sexuality. The men develop female sex organs and start birthing and rebirthing themselves over and over. All the while begging for her to accept it back into her life. A filmic moment as powerful as similar scenes in Society and Eraserhead, likewise delving deep into a Beckettian horror of the body and its functions. The ending is just genius filmmaking, in the best traditions of surrealist horror, searing images into your brain that will live in your nightmares for years. Then the film ends on this extremely ambiguous note. Does Harper take him back? Or does she kill him and end this horror? The film refuses to say. It may read as a transgressive subversion of the “final girl” trope. You expect a badass girl power moment in the end, for the disgusting and abusive men to be defeated by a justified and therapeutic act of vengeance from Harper. But that is not what we get, which leaves one in a state of confusion. Is this film not what we were led to believe? Men ends not in predictable stereotypical cliches but in utter mystery. 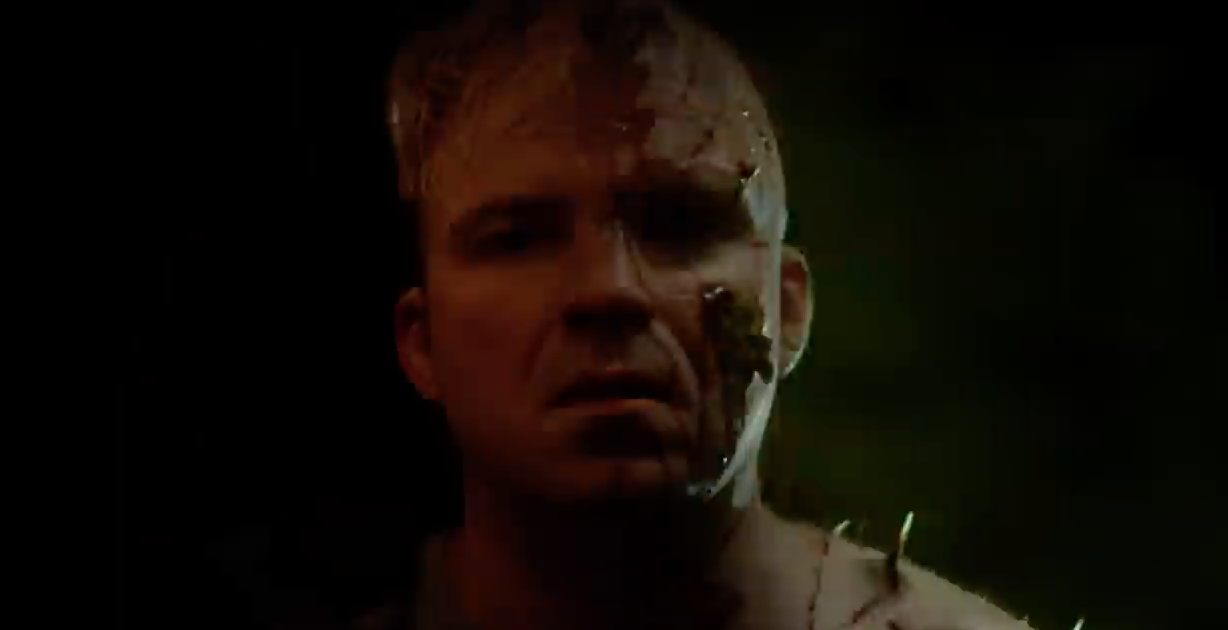 Men stands as a new classic of horror cinema. A part of a new canon of classics alongside such films as Under the Skin, The Witch, Hereditary, The Untamed, Evolution, and The Neon Demon. With themes of dehumanization, the breakdown of a classical sense of reality, the collapse of the family unit, a revitalized focus on the female protagonist alongside the failure of the male hero, and a sense of an unrelenting future coming of failure and ruin. These films guide us into this strange new century as guideposts of where we are at and examinations of what is to come.