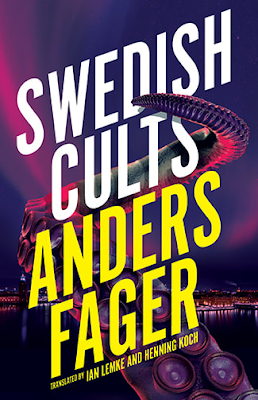 In the next couple of months, I will be featuring books from one of my favorite presses, Valancourt Books. Valancourt is an amazing small press that specializes in reprinting mostly rare or out-of-print genre fiction with a focus on horror. They also publish a wide assortment of classic horror from around the world. They are truly one of the greats working today and are just doing amazing work. Their catalog of obscure classics and offbeat masterpieces is amazing and highly recommended. They have recently published a series of anthologies that attempt to showcase the best in short horror fiction from non English speaking countries, namely The Valancourt Book of World Horror Stories vol 1 and 2. And now the success of that series has resulted in some collections of some of those authors' works being translated by Valancourt and seeing release in late 2022. The three anthologies I’m referring to being released are Anders Fager’s Swedish Cults ( from Sweden ), Attila Veres’s The Black Maybe ( from Hungary ), and Luigi Musolino’s A Different Darkness ( from Italy ). All three of these authors made a huge impression with their works in The Valancourt Book of World Horror Stories vol 1. And I will be reviewing all three of these as they come out.

The first book I will be reviewing is Anders Fager’s Swedish Cults. Fager’s story in the Valancourt Book of World Horror Stories vol 1, titled Backstairs, shocked me with how good it was. Both a deliciously slow burn and a rare example of erotic horror done correctly. Backstairs is just a complete masterpiece of a short story, with perfect pitch, suspenseful, and an ending that will leave your jaw on the floor.  So I was very excited to see Valancourt was translating and releasing this collection, Fager’s first. A critical success in Europe and almost completely unknown in the United States. It was with huge anticipation that I opened Swedish Cults and dug in, and I am glad to say I was not disappointed. In Swedish cults, Fager writes about our current society with very familiar characters, who end up coming face to face with some kind of hideous evil or some kind of cosmic horror. Some of these stories make explicit references to Lovecraft's Cthulhu mythos, while others are a bit more oblique. I would say the work in Swedish Cults is an intentional homage and update to the Cthulhu Mythos. But Anders makes it personal by going heavy in kink and featuring some very questionable protagonists. Social media-addicted schoolgirls, opportunistic social climbers, and oversexed bosses, all fighting against some nameless cosmic horror. Anders has an amazing grasp on characterization, but he also knows how to create a weird and disturbing atmosphere. In his updating and reinvention of the Cthulhu Mythos, Anders makes it his own, paying homage to past masters while creating his own dark fictive universe. His main characters tend to be selfish, promiscuous females, a breed rarely seen in mass-market paperbacks or even in Lovecraft’s own fiction. His work is kink heavy and often will turn a corner into the cruel and harsh. His female characters almost seem to have been brought out of some underground erotic comic book, so fully sexual and self-actualized. But these girls are far more fleshed out and alive than the cardboard bimbos of comic books. Depraved desires abound in these tales, a sexuality rarely found in horror literature and found in full effect here. Comparisons to Clive Barker and Caitlin Kiernan are fully earned. This book is a refreshing blast of Swedish air, reinvigorating the horror genre while also bringing classic tropes into a new era.

Cruel, sexual women facing against nameless abominations and body snatching others. Sexuality is celebrated, Ander’s sexual main characters aren't really shown in a negative light, sometimes they courted the darkness and almost get ruined by it, but there is always something in the darkness they want, that they desire, the darkness is never fully unbidden. I would say Fager is very sex-positive in this collection and he makes some really interesting choices on who to feature as main characters for these stories. These characters are dark, they are perverted, they are outside of what society would consider healthy, but each one is happy with themselves and you don’t feel any condensation from the author, more that he sympathizes with them. In most modern horror, the horror comes from some dark place in the psyche of the protagonist. The horror is often directly related to the subconscious of the main character, some buried guilt or unresolved anxiety. In these tales, the characters have darkness in them, but the horrors seem to stem from outside themselves. A different darkness to try to overshadow their own darkness. These are very self-actualized women. The girls are in consensual kink-driven relationships for the most part. One is a trophy wife, not having to work and able to live a life better than most of her peers, and she loves it. One is a boss of an assistant she slaps around and degrades and they both enjoy it. These are not the innocent victims of classic horror literature, nor the good academic men of the classic Lovecraft mode.

The first story tells of a group of barely legal schoolgirls who like to do schoolgirl things, talk on the phone, post on social media, buy cute outfits, and seduce older men and lure them to their deaths for the pleasure of some ancient monstrosity that lives in the swamplands outside of town. It’s like taking a YA novel about high school girls, perving it up, and then subjecting the girls to Lovecraftian horrors. Another story is about a woman dating a well-to-do businessman who may just be on the move to becoming rich. She desires a man to take care of her, both financially and emotionally,  and her man is more than happy to have such a pretty girl in his life he can take care of. After returning back from a business trip, something has happened to him, something changes, and he comes back sickly and different. When he gets home he lays in bed, wasting away, becoming more and more skeletal each night. But, he now has a raging erection that will not stop, and he now has certain different tastes and certain different desires. The last story is about an artist and gallery owner who is always seeking what’s new and how to maintain being relevant. She has a kinky relationship with her female secretary, with whom she lives a kind of sadomasochistic fantasy life with. Then one day someone enters her life wanting to fund a new art project. Someone rich and wanting something new and transgressive. Something that will break the minds of all involved.