Review and Interview: Gateways to Abomination and author Matthew Bartlett. 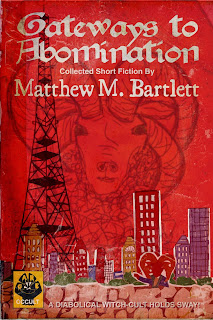 Out of the blackest woods comes Matthew Bartlett’s self published collection Gatesways to Abomination. In Northeast USA a small town is under siege by an occult radio station. Emitting signals like gothic nightmares it corrupts the entire area in its dark spell. Evil rebirths, goat headed warlocks, things lurking in the night, Gateways is a series of vignettes that delight in startling mutations and personal dooms. Incredibly fun to read for the dark hearted. One of the best books I have read this year, this book by itself legitimizes self publishing. The writing style reminds me a bit of the early 20th century french transgressive writers like Bataille and Genet… but which a decidedly gothic aesthetic like a Machen or a Lovecraft. Bartlett is one of the most exciting new authors out there, Gateways to Abomination is a modern masterpiece of weird horror. With exquisite prose Gateways to Abomination’s macabre visions will keep you going back again and again to it’s infested pages. I have managed to track down Matthew Bartlett in his ghost haunted shack out in the fetid swamp lands and got him to answer a few questions on the books and films that have influenced him.

Plutonian: Gateways has a dedication to being transgressive and assaulting the reader with dark surreal imagery. Not really wasting time with any filler background story, it gets right to the point. Gateways seems influenced by French writers like Lautreamont and Bataille. What are your thoughts on mixing weird horror with dark eroticism and transgressive fiction?

Bartlett: It wasn’t a conscious effort on my part to be transgressive – I was trying to do something different, I think, a kind of distilled horror, and at the time I was writing the stories, I was doing so for myself and a few like-minded people. I didn’t think they would ever go any farther than that, so I had license to do whatever I wanted, and what I wanted to do was to bother people, for lack of a better word. There was no direct influence from the above-referenced writers, and, in fact, I must admit I haven’t read them. But having taken a look, I intend to now. So if my stuff gets weirder after 2016, it’s your fault.

Plutonian: John Carpenter made some masterpiece films with his takes on modern witchcraft, technology and paranoia. Gateways deals with a sinister radio transmission, mixing the occult with the modern. Did films like Halloween 3: Season of the Witch, In The Mouth of Madness, and Prince of Darkness have an influence on your writing?

Bartlett: While I liked In The Mouth of Madness, I have to say that Prince of Darkness and Halloween 3 were more direct influences, in particular the latter. At the time I was writing Gateways, I was curious as to the fate of AM and FM radio—with the advent of satellite radio and the prevalence of MP3 players, it seemed like terrestrial radio might be a medium in its death throes. And that fit in quite well with the theme of the vengeful dead trying to use black magic to fulfill an ancient prophecy in a modern world. The thing about radio, it’s not a communal experience, for the most part—the family doesn’t exactly gather around the radio anymore. It’s company in the car. It’s a kid in his room, moving the dial around. Whatever you see around you fades into the background. It’s like reading, in that it can put pictures in your head, but it has the added element of The Voice. The Voice can be conspiratorial, insinuating, persuasive, seductive.
Plutonian: Gateways has a dark mood to it that reminded me of early horror from the 20’s and 30’s that dealt with darkness, madness and black magic. Did films like Haxan, Dracula, Vampyr have an influence on you?
Bartlett: Funny you should mention it. I put Haxan and Vampyr on while I was writing, with the sound down. The look of those old movies, in particular Haxan, absolutely informed a lot of the more grotesque scenes in the book.
Plutonian: Gateways seems to take as it predecessors early weird fiction dealing with survivals of witch cults like The White People by Machen, The Festival by Lovecraft and The Salem Horror by Kuttner but also seeks to outdo them. What are your thoughts on the early weird tale and how it impacts your writing?
Bartlett: At the time I was writing, I hadn’t read much in the way modern or current weird tales at all. I’m not saying that with defiant pride or anything like that; it’s just the way it happened to be for me in the mid-aughts. My inspiration came directly from Lovecraft, Machen, Kuttner, Derleth and the like, along with other less likely, non-horror sources. The idea that even today these old cultists and shamans and ghouls and warlocks are still working their way through time right up to the present was very appealing to me. Still is. I also like the idea of the studious or bookish man falling prey to those old cults—that kind of protagonist suits me more than any kind of modern Everyman. A study is more evocative of horror than a “man cave”—for me, anyway. You mention “The Salem Horror.” I get out to Salem a few times a year, and all so much history is right there on the face of the city, and I’m not talking about the Halloween trappings, the banners, the decorations. Those are just a facade. The old houses, the narrow streets, the ancient cemeteries – you can squint your eyes and see old Salem. It’s wonderfully easy to picture all manner of diabolism going on there while everyone was busy putting innocents to death over in what is now Danvers. That Kuttner story could take place now; in important ways, Salem has changed little..
Plutonian: Gateways certainly feels like a Fulci film with its occult menace and its visceral dooms. Gateways could almost be considered a pseudo sequel to Fulci’s City of the Living Dead and The Beyond. Did Italian filmmakers like Fulci, Bava, and Argento have an impact on you?
Bartlett: Argento, definitely, especially Suspiria—that music!-- and Deep Red. As far as cinema goes, throw in Rosemary’s Baby and Don’t Look Now. There are great gaps in my horror reading and viewing—Fulci and Bava fall in those gaps--but that gives me more to check out in the future, and more inspiration.
Plutonian: If you could pick one director to adapt Gateways into a film…living or dead…who would you pick?
Bartlett: That’s a good question. I have to cheat a bit by going with a collaboration: Ben Wheatley and Ken Russell.
Plutonian: Do you have any films you traditionally watch around the Halloween season?
Bartlett: I do. Halloween and Halloween 3. Pontypool. Trick R’Treat. House of the Devil. Nosferatu (the Herzog version). The Funhouse. It’s the Great Pumpkin, Charlie Brown.
Plutonian: What new projects do you have coming up?
Bartlett: I’m wrapping up the writing for my Muzzleland Press release “Creeping Waves,” which should come out early next year. It’s a sequel of sorts to Gateways, and it starts to get at certain questions:  What is the Real Leeds? How does one get there? There were peeks at the Real Leeds in Gateways and in Rangel, and more are forthcoming. Also I’m working on stories for a hardcover collection for Dunham’s Manor Press. The working title is “The Stay-Awake Men and Others.” After that, there’s talk  between me and an excellent writer about a collaborative project that will be, let’s say, unique.