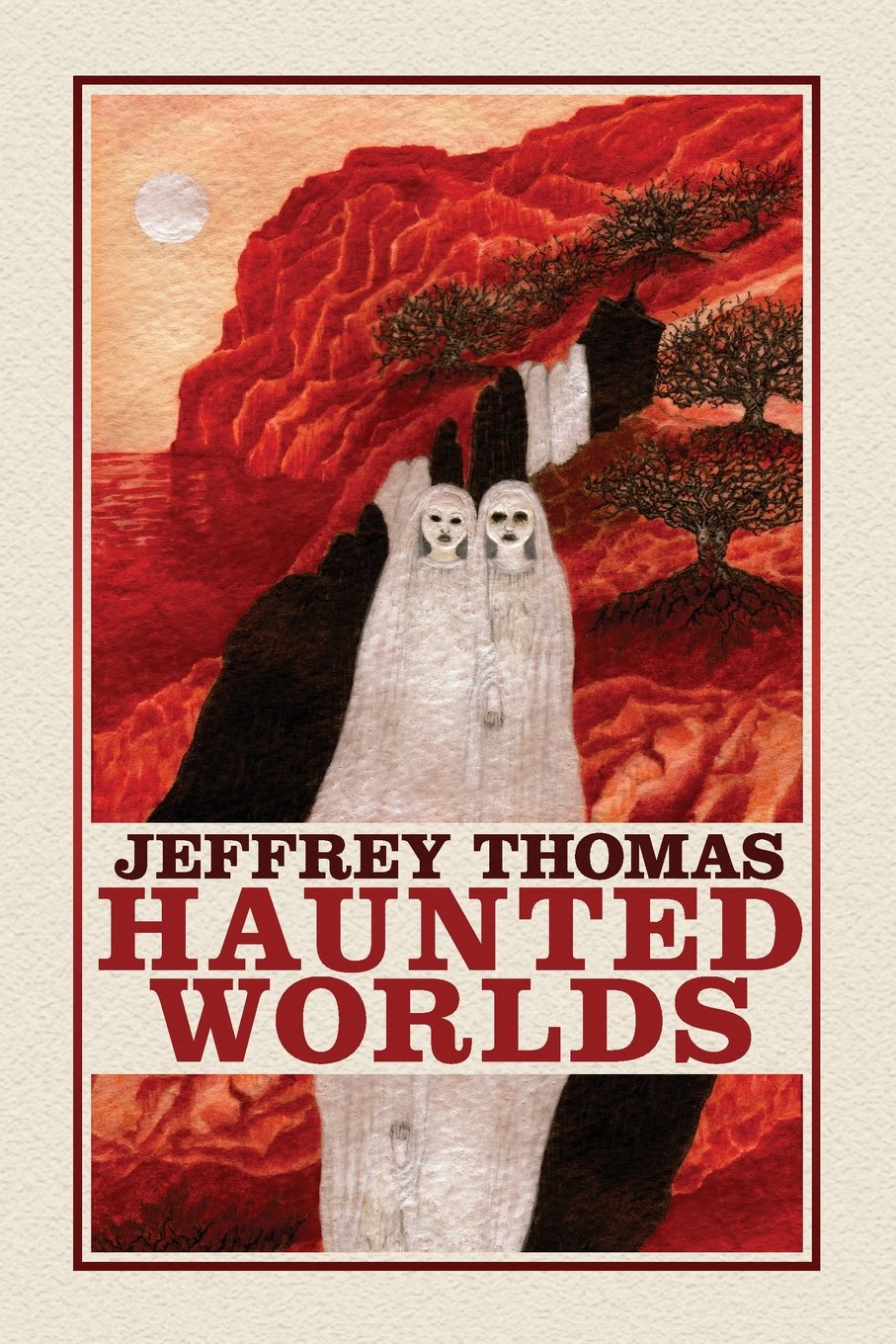 Today I wanted to talk about this wonderful new collection I just read of haunting and haunted tales, Jeffrey Thomas’s Haunted Worlds. This book has kind of been flying under the radar of weird horror fans and I think it deserves a brighter spotlight on it. Haunted Worlds has this wonderful and surprising diversity of content. Whatever style of the weird and dark that you like, you are sure to find something to sate your appetite in Haunted Worlds. Mr. Faun is this strange psychological tale of terror, riaL gnoL is a ghostly haunting that may hide much more, The Toll is a Outer Limits inspired scifi shocker, The Temple of Ugghiutu is a tale of dark fantasy at its finest. But I wanted to focus on the stories that fall more on the side of the nightmarish. And trust me, there are stories in here that are not safe to read in the dead of the night.

The first story in the book is a insidiously charming little number called Carrion. A mood piece about unsettling roadkill and pregnant women. The story focuses on Lambert, a man who is getting older and is just plain dissatisfied with his life. At his job he harbors a secret desire for a co-worker, all the while he is trying to work up the nerve to ask her out. On his daily drive to work he keeps seeing this rotting animal corpse on the side of the road, and obsessively keeps track of its state of decay. He fantasises on the crawling things that must be eating at the corpse, the insects that infest it. Later he finds out the coworker he longs for is pregnant. She eventually stops coming to work. This causes the story to spiral into disturbing visions of strange invasions of the body and parasitic creatures half seen emerging from the flesh. Lambert feels dead inside, and these things that feed on the dead haunt him, maybe even are inside him. Is the roadside corpse the Carrion of the title… or is Lambert?

Later in the collection, we come to The Left-Hand Pool. The Left-Hand Pool and Carrion are kind of reflections of each other. They stand apart as stories but reflect similar obsessions and fears. The Left-Hand Pool is a story about a man, just going through the motions of making a living at a soulless job he does not really care about. But, at that job, there is a woman there he would like to ask out, which gives him something to light up his droll existence. The road on his way to work crosses a body of water that has been separated by the road built going down the middle of it. Now the right hand side of the pool is seemingly a normal pool of water. But the pool on the left side is covered in slimy muck and appears to be filled with rotting things. Later on, on his drive, he sees something coming out of the filthy mire stagnant pool. Something mysterious, alien, and beautiful. Then at his job he finally gets up the nerve to ask the woman out he has been longing for. She rejects him, the smile on her face disappearing as she walks away… she has a boyfriend. Deflated he thinks back on a childhood memory of going hunting with his father and being horrified at his father killing a deer. The slow pursuit of the gunshot wounded deer stuck like a sliver in his mind, sad and disturbing. Later on, he sees the same mysterious creature emerging from the clean pool on the other side of the same track of the road. It stands taller and seems in full bloom, changed somehow, now seemingly insane and demonic. He drives home where something from his past awaits him, bringing him full circle with the horrors of his childhood. Both The Left-Hand Pool and Carrion are masterworks in strange and ambiguous horror.

And finally I want to talk about The Green Hands Parts 1 & 2. This just may be the best story in the book. A novella divided into two sections. The first deals with a man named Zetter, who is on the run from these creepy and strange pursuers, chasing down Zetter, trying to touch him with their bizarre glowing green hands. He does not know what they want, but he does know that they bring erasure to anyone they touch. They blend in with the unknowing crowds, attacking out of nowhere. Part 1 is a tense chase narrative that ends in a madness that continues into the next part. In part 2, things really go apeshit. The story goes full throttle into a surreal cosmic fantasy that falls even further down the rabbit hole of strange hand obsessions. Interesting enough, horror stories revolving around disembodied hands have a deep history in weird horror. Tales like The Beast with Five Fingers by W. F. Harvey, The Body Politic by Clive Barker, and Bianca’s Hands by Theodore Sturgeon are essential reads in this genre of hand body horror and cousins to The Green Hands. But, at its heart, I think it is best seen as a homage to William Hope Hodgson. Hodgson’s short stories of strange things that emerge out of the unknown to assault the protagonists like A Tropical Horror, Demons of the Sea, and Out of the Storm, and his bizarre cosmic horror novels like The House on the Borderland are landmarks in the history of weird horror fiction. Hodgson was perfectly at home writing stories full of unrelenting invading horrors and cosmically mindbending alien worlds, and you can see how they inform and influence The Green Hands. This is a major story and is really a must read. Let me put it this way, if Ligotti’s The Last Feast of Harlequin is the greatest homage to Lovecraft ever written, then Thomas’s The Green Hands is the greatest homage to Hodgson ever written.
Posted by Scott Dwyer at 9:26 PM