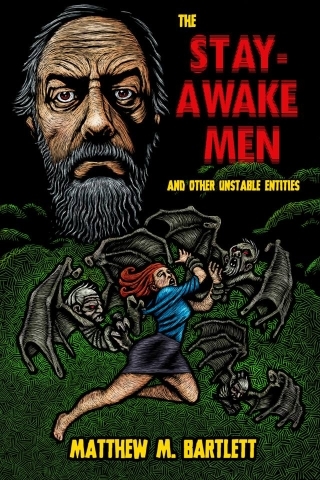 I would like to welcome back to The Plutonian, Matthew M. Bartlett! This will be the first time I have had a guest on twice to be interviewed. I originally had him on to talk about one of my favorite books, Matthew’s collection from 2014’s Gateways to Abomination. Also, Matthew was kind of enough to let me publish his amazing story “ Provisions for a Journey “ in my anthology Phantasm/Chimera! Matthew has a new collection out from Dunhams Manor Press called The Stay Awake Men and Other Unstable Entities. Welcome back, Matthew!

Glad to be back!

I feel like the stories in The Stay Awake Men and Other Unstable Entities are some of your most assured and masterly work. From the gonzo nightmare freakout of Carnomancer to the insidiously strange No Abiding Place on Earth, you really seem to have found your footing. One of your earliest collections, Gateways to Abomination, was a masterpiece of short prose pieces, maybe almost vignettes really. Now, in The Stay Awake Men, these are more traditional short stories. Do you prefer one mode over the other? Is this a reflection on where you are heading with your writing? Are there any thoughts of attempting a novel?

I like to go back and forth between flash prose-poetry pieces and traditional short stories. Each is satisfying in its own way, though traditional stories are certainly more of a challenge –a healthy challenge. I don’t really know where I’m heading. I can say that my current project is a serial novel, though it’s certainly not a traditional narrative as such. It’s an experiment. I hope it works. I don’t know if I’ll ever do a traditional novel. If I do, I want it to be one of those can’t-put-it-down narratives, a book where the reader is desperate to know how it all turns out, rather than a ponderous slog. If I can’t do something like that, I probably won’t do a novel at all.

I’m revolted by my own body. I avoid it as much as possible. I hate that I have to deal with it in the damned shower. As I get older, it pulls terrible, nasty little tricks on me, things I never would have anticipated or even known to dread as a younger man. The flesh, the body, is a series of problems waiting to happen. We err when we try to think of our “soul” or “spirit” as separate from the body. It’s woven in tightly. We’re vulnerable as can be. We’re subject to injury, of course, and diseases from within. Accidents are around every corner, in your house and out. Enjoyable food fattens us up. Age causes us to deteriorate. A lot of fear is born of finding some abnormality in our own bodies, or having a doctor finding something. The lump in the breast. The strange flare-up or rash. The terrible diagnosis. And just so it isn’t all awful, we have sex thrown in there. Of course, sex has its own horrors, and its own risks.

Many of your stories take place in a fictional small town called Leeds, located in Massachusetts. Leeds is haunted by sinister radio transmissions and devilish forces, and has a sense of place that maybe rivals Lovecraft’s Arkham. What I want to ask is, is Leeds a place that represents something that you genuinely fear? Or is Leeds somewhere that you would actually like to escape to, as kind of a personal dark fairyland?
I would love spending time in my Leeds. I would be a regular listener to WXXT. I’d have the wacky morning show on as I cooked up my morning bacon. I’d always be attending services at the corrupted churches and seeking out the odd gatherings of men in old-style clothing in strange places. I’d eat at the Bluebonnet every Saturday…actually, I do that now. I’d take a lot of pictures if I lived there, and I’d close down Anne Gare’s bookshop every night, having spent a frightful amount of my paycheck on weird books. Whenever I write about Leeds, I’m visiting, and I’m happy. I’d probably move there. I’d be frightened all the time, unsure of my sanity. That would be fine. That would be better than fine.

There is this real sense of fun when reading your work. You can tell here is an author who enjoys writing and it really shows. Have you always been into horror and writing? Was there a definite point where you decided to just go for it and start submitting work?

I loved horror forever, but the fact is I couldn’t write horror until I started writing horror. My early attempts were just laughable. As I was preparing Gateways for publication, I began to submit pieces from it here and there, not wisely or with any kind of strategy at all, just scattershot. One or two were published in small press anthologies, at least one of them in a press I’m still very fond of, and I was and am happy about that, but I always felt those tales worked better in the context of the book, the trajectory of the book, as the bigger picture comes into play as the reader proceeds through the book in order. But, anyway, I love writing this stuff, even when it’s challenging, or when it causes me to lose sleep thinking about how to get myself around a plot difficulty. I’m glad that it shows.

A writer who I know influenced you is Stephen King. King, I would say, is talked about a lot in mainstream horror circles, but not really at all in weird horror circles. Can you talk about how King influenced your writing? And also, do you feel that King’s work is still relevant to the horror scene today?
I don’t know that he’s not talked about in Weird circles. Then again, I think there’s a huge overlap between Mainstream and Weird horror circles, at least in my personal experience. This is me talking from my ass, but I’d imagine that Weird Horror circles are interested in and open to mainstream horror, more so than the other way around. In any event, my grandmother gave me her copy of Christine when I was 13 years old or so. I loved it, was completely taken with it. I gradually accumulated more King books as a teenager. My first thought upon reading the seminal Night Shift collection: I would love to write horror like this. My second thought, a millisecond after the first, was: I could never, ever write horror like this. King’s talent and range and imagination was and is extremely intimidating. Is he relevant today? Absolutely. Revival is a work of modern weird with a heavy Machen influence, and is also a novel that drags in you and pulls you through it, a couldn’t-put-it-down novel. I’ve encountered good Weird Horror novels, but it’s rare that I find one that I can’t stop reading. Sure, he has his bad books, and his overlong books, and he’s provided rapturous blurbs for some real dud novels, but it’s really hard to fault him. He loves horror and has really dragged it into mainstream culture without sanitizing it or watering it down. He’s a powerhouse – to my way of thinking he is, and should be, relevant to everyone in every corner of the genre.

You have been blessed with having some amazing artists do work for your books. From Dave Felton to Aeron Alfrey, I have really enjoyed the art used as cover art and interior illustrations that have accompanied your publications. But what are your thoughts on having an artist render scenes from your works into a visual medium? Do you feel that an illustration can sometimes miss what you are going for and do you worry about that? And do you feel that they can maybe add something to your prose, maybe illuminating something that you did not yourself see?

I can only be grateful to the artists I’ve worked with, and to people who’ve sent me fan art unsolicited. They don’t match what I have in my imagination – how could they? Each piece of artwork is the artist’s vision, and when an artist is inspired by something I did, I’m just flat out gobsmacked and thankful. It’s funny, though, when I see graphic adaptations of work by Lovecraft and Ligotti, say, they rarely resonate with me, because they are extremely different from what I pictured in my head. For some reason when I see visual adaptations of my own stuff, that doesn’t matter to me one whit. And yes, sometimes they do work that brings something out I hadn’t seen or considered before. I believe I used the figures from Aeron Alfrey’s Rangel cover…figures he came up with on his own…in a story I wrote after I saw it. Aeron, Dave Felton, Nick Gucker, Michael Bukowski, Yves Tourigny, and others…these are people with incredible talent. It’s a gift to work with them. When I was writing the stories that ended up in Gateways, I never imagined that ten, twelve years down the line I’d be seeing art based on what I was writing. It never fails to excite me.

If you could go back in time, and take three stories from any author, alive or dead, and claim them as your own, what three stories would you take?

Lovecraft’s The Rats in the Walls, Mannequins in Aspects of Terror by Mark Samuels, and Raise High the Roof Beam, Carpenters by J.D. Salinger. I already have about forty more in my head. I’m tempted to keep going.

So what’s next? Any upcoming projects you would like to talk about?

I’m working on the serial still, and I have a few chapters of a third WXXT/Leeds book in a folder on my computer. I have a few ideas for collections down the road, including a collection of Lovecraft satires, a collection by a fictional author (with me writing the introduction), and a more traditional collection I’d like to have out in 2019 or 2020, one for which I hope to find a publisher. I also have a tentative plan to do something unique, another collaboration with artist/game designer Yves Tourigny—it’s still only in the idea stage, but if it comes to pass, I think people will really like it.
Posted by Scott Dwyer at 6:26 PM