HV Hyche's Film Review: Dont Deliver Us From Evil and Poison For The Fairies.


Since my inaugural essay for The Plutonian was about a non-stop gore-fest, I decided to go in a different direction this time.  Instead of covering one film, I will be covering two: Joel Séria’s 1971 French film, DON’T DELIVER US FROM EVIL and Carlos Enrique Taboada’s 1984 Mexican film, POISON FOR THE FAIRIES. I selected these films because they would make a superb double feature. I also chose these because I have an intense love of genre films with female protagonists, and these films are certainly no exception.

DON’T DELIVER US FROM EVIL follows two teenage heathens, Anne de Boissy (played by the director’s wife at the time, Jeanne Goupil) and Lore Fournier (actress Catherine Wagner) as they intentionally commit sins in order to please their Master: Satan himself.  Both girls attend an extremely conservative Catholic boarding school, where they get their kicks by making up outrageous stories to tell the priest during confession. When Summer break begins, the girls return to their respective homes. When Anne’s mother and father leave for a vacation without her, she invites Lore to stay with her.  It is at this point that the somewhat harmless pranks and games the girls had been playing begin to turn far more sinister. They often use their sexuality to taunt and frustrate men; however, the girls become closer each day, and eventually, it is implied that they have become lovers. After Lore began hitting on a local man as a joke, he attempted to rape her.  Luckily, she got away, but the girls still decided to get revenge by setting the man’s house on fire. Soon after that incident, Anne and Lore made a plan to poison the many beloved birds that belonged to the groundskeeper, Léon. They were going to poison one at a time, but one day, Anne killed one of the small birds in her bare hands. That was the only time Anne showed any remorse for her wrongdoings.  She is the alpha of the two girls, so seeing her upset was quite a shock.  To show how committed they are to Satan, the girls held a secret ceremony in an abandoned chapel they found, so they could fully dedicate themselves and their actions to Satan.  Soon after the ceremony, the girls commit their worst crime yet: they commit a murder. I don’t want to spoil the ending for those of you have yet to see it. However, it does have one hell (pun not intended) of an ending which involves extreme chaos and flames. 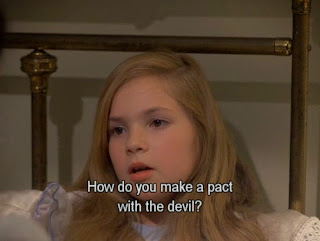 POISON FOR THE FAIRIES  is a story about two young girls named Flavia (Elsa María Gutiérrez) and Verónica (Ana Patricia Rojo).  Flavia is a new student at the Catholic school Verónica attends. When it becomes clear to Verónica that Flavia comes from a wealthy family - unlike Verónica herself - she becomes extremely jealous.  In order to get closer to Flavia, Verónica tries to impress her by explaining that she is a witch - a subject Verónica is very familiar with because her nanny exclusively reads books about witches to her as bedtime stories.  Flavia doesn’t believe Verónica at all, but she grows less skeptical and a bit frightened when Verónica predicts certain things that will occur - things that happened to be mere coincidences. With Flavia now being quite scared, Verónica uses her fear against her and begins to push Flavia around.  She even threatens Flavia with black magic in order to make poor Flavia’s life a living hell if she doesn’t obey Verónica or give her whatever she wants - including Flavia’s own puppy.

Verónica’s aunt informs her that fairies are enemies of witches.  Because of this, Verónica then forces Flavia to invite her along on a family trip to Flavia’s parents’ vacation house in the country.  Verónica uses the trip as an opportunity to collect a long list of gross items to create a poison that will kill fairies. When Flavia finds out what Verónica is doing, she becomes so terrified and angry that she snaps.  Once again, I don’t want to ruin the endings of these films. However, much like DON’T DELIVER US FROM EVIL, POISON FOR THE FAIRIES also ends in flames!

I believe both films compliment each other in many ways.  Their similarities along with their differences are what make watching them back-to-back so enjoyable!  It is very easy for me to imagine the very young girls from POISON FOR THE FAIRIES growing up to be the teenagers in DON’T DELIVER US FROM EVIL.  One of the most obvious similarities is how both films end in flames, which I pointed out in the synopses of the films. I believe in both films, the girls set the fires as a big “fuck you!” to the people who crossed them.  For example, in DON’T DELIVER US FROM EVIL, the act is meant to shock, terrify, and outrage as many people as possible.
As for the differences between the films, DON’T DELIVER US FROM EVIL was very loosely based on the true crime story known as the Parker-Hume murder case that took place in New Zealand in 1954.  In 1994, Peter Jackson directed HEAVENLY CREATURES, which is a much more accurate portrayal of the case. I definitely prefer DON’T DELIVER US FROM EVIL because of how outrageous it can be! Even though the Parker- Hume case has not officially been attributed to influencing POISON FOR THE FAIRIES, it seems entirely plausible that some elements of the film could have been influenced by it.

Another major difference between the films is probably the most important: the relationships between Anne and Lore in DON’T DELIVER US FROM EVIL and Flavia and Verónica in POISON FOR THE FAIRIES. Throughout their film, Anne and Lore grow closer and closer each day.  Anne even becomes protective of Lore and even saves her at one point. During a summer vacation Lore’s parents make her attend, she writes Anne the following letter:

“My darling, it’s been ten days since we’ve parted, and I’m as unhappy as I can possibly be.”

Unfortunately, Flavia and Verónica have a “friendship” that is far more complicated.  To me, it seemed as if Flavia was initially very happy to make a new friend on her first day of school, but the jealous and power-hungry Verónica had an entirely different motive: intimidate and scare Flavia until she was completely submissive when around Verónica.  Unfortunately for the once skeptical Flavia, the plan eventually worked. In short, Anne and Lore were extremely close, and it was them vs. the world. As for Verónica and Flavia, they constantly battled each other.

Personally, I love both of these films.  As I stated in the first paragraph, some of my all-time favorite genre films revolve around women - especially young women.  In fact, in POISON FOR THE FAIRIES, Anne and Verónica are the only characters that show their entire faces (with the exception of a brief shot of Verónica’s grandmother).  You only hear adults - you never see them. I really like that because it definitely keeps you focused on the two main characters. If you are in the mood for dark, yet morbidly fun films, you should definitely give these a chance.  If you can, I highly recommend screening them back-to-back. If you don’t, you’ll be missing out on witchcraft, secret ceremonies, murder, and Satan worship… and no one wants to miss out on all of that!