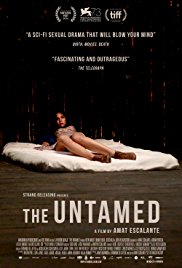 In Amat Escalante’s erotic sci-fi horror film The Untamed, there are a couple scenes of the main characters looking off into the sky, with a look of wonder and longing on their face. But as this film eventually shows, human wonder and longing is no innocent thing. The beginning scenes of The Untamed show a slow-motion asteroid on its way from the mind breakingly far away and abysmal places of the dark Universe, on its way to fall onto an unsuspecting Earth. Then the film cuts to a young girl named Veronica being sexually ravaged by some strange tentacled.. thing. The main focus of the film centers on four people: Alejandra and Angel, a young married couple with kids, Alejandra’s cute and successful brother Fabian, and a young mysterious woman named Veronica. Alejandra is detached and distant from her husband and from her day to day life. Unknown to Alejandra, her seemingly homophobic husband Angel is having an affair with her brother Fabian. Alejandra has a well-regulated life, she works all day at a candy factory and takes care of her two children. And while her husband is out at night secretly fucking her brother, she sits at home with her own secret and perverse desires. And then out of the blue, like she senses a rift in Alejandra‘s and Angel’s relationship, Veronica slithers her way into all their lives, befriending first Fabian, and then Alejandra, eventually leading the both of them, one by one, to a strange cabin, into a dark room with a old dingy mattress laying on the dusty floor, where in the corner lurks this strange alien being, Veronica promises them that what they are about to meet is maybe the most beautiful thing on Earth, maybe even the Universe, something that will free them from their lives of entrapment and thwarted desires, she brings them to feel its alien caress.

All the characters in The Untamed walk around like if in a dream. They do everything normal responsible citizens do, except for Veronica, they take care of the kids, go to work, pay the rent. In most scenes, their faces read like a blank slate, maybe with a hint of exhaustion from work or a bit of repressed anger in their eyes when they stare off into the distance. They are somnambulists, just sleepwalking through their lives. But underneath, they want to break free. To escape the trap life has set for them. They dream and they desire. They are bored with life and want to find meaning in sex and perversion. They want to fuck. All the characters freely fuck throughout the whole film, with the exception of Alejandra, who is too busy with kids or work to do anything but lazily lay beneath her husband while he fucks her. But after Alejandra meets Veronica, that will all change. Veronica is a bit of a naive character. She is awkward in social situations. She just says what she feels and does not care what people think of her. She uses her youthful sexuality to make her way through life, to get what she wants. She is a bit adrift in the world, with no family, no job, and no partner. But she has found something that she feels she wants to belong to. She is addicted to the thing in the cabin. To the point that it may destroy her. The alien thing arrived on the asteroid seen at the beginning of the film and has been hidden away in a cabin by an old married couple, a retired scientist and his wife. They look after it and they bring it what it wants, they fulfill its strange desires. They introduced Veronica to the thing, and she found meaning through it. But it has started to become abusive to Veronica, apparently, the more you copulate with it, the more violent it becomes in its lovemaking, and she agrees with the married couple to find it new lovers. So she first brings Fabian, and after Fabian is destroyed by the creature, she brings it his sister Alejandra.

The thing in the cabin is a strange mess of tentacled horror and alien anatomy, completely nonhuman and abjectly disturbing. Something about being in its presence, makes everything living, animals, people, want to fuck. It kind of centers them, allows their most hidden away selves to emerge. It fucks you and enters you, running its tentacles over all your bodies and your various holes, taking you over with its own desire, its all-encompassing penetration. From the hidden away cabin, the alien corrupts all the characters, and everything it comes into contact with, for good, or for ill. When they leave the cabin, the characters feel unfulfilled with their regular lives, their work lives, their family lives, after knowing such a rapture, all other pleasures in life are found to be lacking. Veronica tries, reluctantly, to get away from it before it destroys her, but Alejandra has found new meaning in life, committing herself fully to her alien lover.  For the first time in a long time, she is truly happy, no matter what the outcome may be. By the end of the film, you understand why the characters keep looking up to the sky in wonder. If this thing came from the stars is representative of what lurks out in the outer dark, does the entire Universe just seethe and roil with creatures fucking? Is that the secret purpose of life? To penetrate and be penetrated?


In terms of where this film stands in modern horror cinema, it obviously is some distant cousin to Zulawski’s Possession. The Untamed is certainly a more subtle and quiet film whereas Possession is more loud and in your face. But The Untamed does have several moments of strange beauty and dream images. This is a coldly gorgeous film. It shares with Cronenberg’s film Crash a boldness in directly representing sex as plot. In showing humans to be sexual beings in a very taboo-shattering way. I think that The Untamed would make a great double bill with Glazer’s Under the Skin, both coldly poetic films that explore the alien and the feminine in sexual/gothic terms. Also, this film has some of the most startlingly unnerving dreamlike imagery since von Trier’s Antichrist. There are images that will stick with you for the rest of your life in this film. The Untamed continues the new wave of arthouse horror films that take inspiration from directors like Cronenberg and Tarkovsky. Modern horror cinema is releasing some of the best work the genre has seen since the 1970s, and I think The Untamed continues that trend, being one of the best films to have come out recently, being both challenging and provocative in an era of cookie-cutter megaplex blockbusters.  An under talked about, under viewed masterpiece. Highly recommended.
Posted by Scott Dwyer at 6:22 PM