Review: The Age of Decayed Futurity. 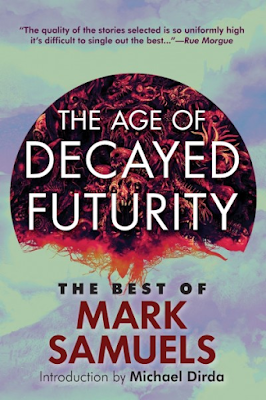 One of the books I was most excited about in 2020 when it was announced was the Mark Samuels best-of collection The Age of Decayed Futurity. For years Mark has been a master of horror fiction producing some of the most mind-bending and beautiful works of this era. And let me say this collection exceeded expectations. The stories in The Age of Decayed Futurity, at their best, have this darkly ecstatic pleasure coursing through them. Tales of corrupting language viruses, possessing fungi, and horror fiction as a kind of alien invasion, are just so bleakly fun. Don't get me wrong, they are deadly serious, these are not tales written to joke, but for anyone who loves horror, this is quality stuff. I would compare his work to other great pulpy yet pessimistic tales like Karl Edward Wagner’s Sticks or Lovecraft’s The Hound, completely serious love letters to the genre, full of drive and passion. In the best sense, the prose in these works is erotic, plunging headfirst into private obsessions and subliminal desires. Tale after tale of bodily corruption, alien possession, and the disintegration of reality by invading realms of nightmare, read like a horror masochist’s private book of fetishistic dreams. And to further the analogy, there are some works that attempt a deep dive to explore the core issues at the heart of desire and sexuality, taking a more abstract and distanced approach to the material. Then there are works that play at a more surface level, playing with the forms and tropes, taking pleasure in the different ways of the telling and engaging with the material on a personal level, The Age of Decayed Futurity is of the second type.

Mark plays these kinds of metagames with his fiction. A lot of his stories are about the horror genre itself and its influence on the reader. He asks in his work, what if horror actually did have some kind of damaging effect on its readership? A worse writer would take this as a start of a parody or a social commentary, but Mark’s work betrays this kind of longing for horror to actually be... sinister and damaging. If I can put some kind of historical context for new readers I would say: In a general sense, Poe wrote about the combination of love and death, Lovecraft wrote about the self as alien, Ligotti wrote about life as inescapable nightmare, and Samuels writes about disease and contamination of the mind and body. The intermixing of the self and the other. Language as disease. Fiction as disease. A lot of his work acts as a subtle meta also on the writing and of weird horror fiction. There are also heavy doses of weird scifi in his work. His writing is in constant dialogue with the classics of the field. Samuels may be the greatest of what I think of as the “ Ligotti circle “, writers influenced and inspired by Ligotti, sort of like all the writers who came out around the time of Lovecraft and shortly after, like Smith, Leiber, Bloch, etc. One criticism I would have with most of Mark’s collections would be that they would contain maybe half fantastic stories and the rest would be rather lackluster or uninspired, at least to this reader. So when it was announced that a best-of was coming out, I thought Mark would definitely be a writer who would benefit from such a collection. So having a greatest hits collection is a gift and a revelation for the horror literature community. If you have not had a chance to check out his writing or were not completely satisfied with one of his collections, I would suggest The Age of Decayed Futurity is the one to get. He writes tales of urban decay and mind-twisting horror as well as Campbell, Ligotti, or Lane. Protagonists find something rotting at the core of existence, and you can tell the author takes great pleasure in detailing the exact measure of the decay of existence, all wrapped in beautiful prose. There is a genuine passion behind his writing.

Some of my favorite tales in The Age of Decayed Futurity would be: Ghorla, which starts off as a black comedy about obsessive horror fiction fans and small presses and turns sharply into just what the hell happened territory. Vrolyck, a tale of late-night book readings in diners and the dangers of how a horror tale might just infect/affect you. Mannequins in Aspects of Terror, which hands down has to be one of the most frightening horror tales ever written. My World Has No Memories, surreal and strange, it plays out in the imagination like the greatest obscure and mind-bending 1970’s horror film never made. And not finally since I could name many more, but Court of Midnight, which is this gorgeous vision of all of existence falling into disease and corruption. I really think The Age of Decayed Futurity is one of the greatest collections ever created, and I envy your first infection from, oh wait I mean first reading of this book!