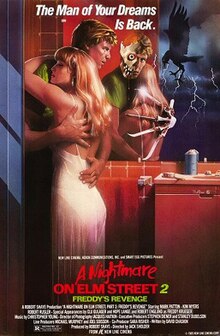 One of the aspects of dreams that horror films always seem to get wrong is that dreams are intensely personal to the dreamer. If one was able to watch someone else's dream, you would almost always find the dream to be completely incoherent with no understandable narrative. But to the dreamer, the dream is a deep delve into the most personal domains of hurt and desire.

One horror film franchise that is deeply involved in the explorations of dreams and how we view them is the A Nightmare on Elm Street series. Like most franchise horror films that spawned a seemingly unending number of sequels, the quality of each film varies from almost achieving greatness to utter stupidity. Growing up I must have seen most of these films dozens of times, except for one, which as a teen I found to be confusing and seemingly out of place in the series. That film would be A Nightmare on Elm Street Part 2: Freddy’s Revenge. Well, after recently rewatching that film, I now think it may be the best Nightmare on Elm Street, beating out my old favorite of Part 3: The Dream Warriors.

Part 2 opens up to a new family, the Walsh’s, moving into the former home of Nancy Thompson, some years after her family and friends were destroyed by dream stalker Freddy Krueger. The film centers on Jesse Walsh, a teenage boy who is seemingly popular at school but has some deeply hidden insecurities and confusions. Jesse starts to dream of a hideously burned man with a glove fitted with razors on each finger. This burned man, Freddy Krueger, has sinister intentions for Jesse. Freddy wants to take over Jesse’s body, so he can bring his nightmare world of murder into the sunlit real world.

A Nightmare on Elm Street takes the central conceit of the first film, that Freddy stalks teenagers in their sleep and makes their nightmares real, and inverts it. In Part 2, Freddy wants to enter the real world and make everyday life into a nightmare. It makes Freddy into this kind of vortex of unreality. He seeks to subvert the normality of reality that we take for granted and twist it into something malevolent and delirious, to make the whole universe a nightmare. It’s actually a quite brilliant idea and one that I missed on my first viewings. One just assumes that Freddy attacks teens in their nightmares, so I was confused why people were getting killed in real life, I didn’t get the inversion of the premise.

In the first two films of the series, the nightmares are deeply personal, completely intertwined with the main characters. Nancy’s visions of Freddy had to do with her shame and hurt over her feelings of parental abandonment and the fear of losing her friends. Jesse’s dealings with Freddy centered on his fear of his body changing into some unknowable thing, and his deeply repressed needs and desires that felt alien to his concept of who he was. The visual style changes from the first to the second film to capture this change in focus. A Nightmare on Elm Street has these creeping phantasms of Nancy’s friends in body bags, visions of opened bodies and the stuff that leaks out, whether ropy innards or slimy crawling things. Part 2 has these Cronenbergian visions of discarded husks and bodies emerging from bodies, all underscored by this subdued homoerotic tension.

How great would it have been if the A Nightmare on Elm Street series had kept going with the premise that Part 2 brought? That Freddy, and the actual framework of the film, was actually shaped by the fears and secret desires of the main protagonist. Instead, we got a wise-cracking anti-hero that spewed one-liners while finding new and ever more over the top ways to kill teenagers. There is a seriousness to the first two films that gets lost along the way. Freddy is more malicious, he isn’t saddled down by the ridiculous expectations of the later films. He is allowed to actually be scary. The first A Nightmare on Elm Street had a brilliant idea with the killer who stalks you in your nightmares, but was hampered by Wes Craven's directing style. While a lot of the imagery was beautifully surreal and disturbing, the pacing and the editing was just too fast, the film never allowed any kind of dream-like atmosphere to emerge. Anytime a scene started to get interesting, he would immediately turn it into a chase scene, killing the mood. Part 2 fixes the problems of the first one. This one has atmosphere to burn. The scene of Jesse sneaking into his sister's room, possessed by Freddy, only to see his sister jump roping in slow motion singing, 1... 2... Freddy’s Coming For You…, and the look of utter horror on his face is simply devastating.

I think that like Halloween 3: Season of the Witch, this one is due for a rediscovery by horror fans. A Nightmare on Elm Street Part 2 is a film that showed how much could have been done with the series. It pushed the boundaries of the franchise while also blazing its own trail. The film is both a vital part of the A Nightmare on Elm Street series and completely capable of standing on its own. 9...10… Never Sleep Again...