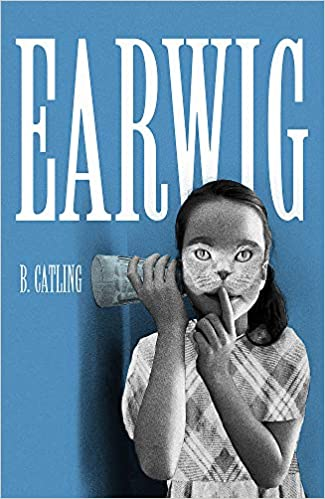 If horror is an unknown figure cloaked in shadow whispering mysteries, then fantasy is a chimera, delighting in transformation and delirium. The ever mutation of previously known forms, the infinite variations of the flesh, and the venturing through different landscapes of the imagination. To take the familiar and make it strange, and to take the strange and make it familiar, this is what fantasy does best. Horror is a genre of a kind of dark revelation, the unknowability of the world and ourselves and the dark secret that lay at the heart of our existence. Fantasy is a genre of travel and voyage, of seeing ourselves reflected in the other and reveling in the infinite possibilities of existence.

Brian Catling’s short novel Earwig is about a little girl who has no teeth and has had an artificial apparatus installed in her jaw to allow her to wear teeth made of ice, which every couple of hours needs to be replaced with fresh ice teeth. She is overseen by a brutish and dispassionate man, who was contracted to be her live-in guardian in an isolated apartment. Her parents are mysteriously absent and he is locked in with her for most of the day, rarely venturing out for necessities. Into their lives enters a strange being with otherworldly powers and an uninvited cat. This plot summary can not hope to contain all the twists and turns this narrative has in store for its readers. Earwig is written in gorgeous prose, has all these wonderful diversions that the book goes on, and has the bravery to go into both taboo and delirious territory.  It is an overused cliche, but Earwig reads like an extended dream, characters floating in and out of the narrative, abrupt changes in location and time, the unreal and the real melting into each other.

Earwig has something of the strangeness of middle and eastern European fiction like Grabinski and Schulz, it also shares some genes with southern American writers like Cortazar and Carrington. But this is not to say in any way Earwig is old-fashioned or is in any way a work of homage or nostalgia, Earwig is a shockingly original and modern book. I think some would try to place Earwig in the same category as the urban fantasy works of Mieville and Gaiman, but I think that would be a hideous misinterpretation, while they may have similar sources of inspiration, Earwig is just better written and more honestly creative. Catling is an absolute master of prose and just seeing his choice of words and the interplay of sentences is a delight. Earwig is a very poetic book and should be savored. I would not consider Earwig to be a work of horror fiction, but I do feel it certainly will be something that adventurous horror fans would enjoy. Inside this work of fantasy lurks a very dark heart. Sinister figures, disfigured beauties, bizarre creatures, and a subtle layer of violence and sexuality.