Black Cats and Black Graves: The Films of Lucio Fulci. 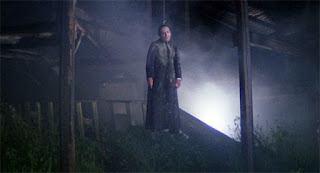 In any discussion of the great horror directors, the name of Lucio Fulci must be high on the list. His dark landscapes of fog-enshrouded cemeteries, plagues of rotting zombies, malevolent spider attacks, and obsessive ocular violence, are a must visit in the dismal night covered country of horror cinema. Fulci’s zombie trilogy, The Gates Hell, The Beyond, and The House by the Cemetery, were a formative viewing experience in my life. Seeing The Gates of Hell at around the age of 12 or 13 both scared me so much I ran out of the room around the halfway point of the movie, and fascinated me with its operatic violence against the body and it’s just overwhelming doom-laden gothic atmosphere. The Gates of Hell was the gateway drug that turned me into a horror film fanatic. His later zombie film The Beyond further pushed the envelope of surreal filmic transgression. The Beyond stands with toe to toe with Romero’s Night of the Living Dead as the pillars of the zombie film. Fulci then hit us with The House by the Cemetery, which on first watch I have to admit I was kind of baffled and confused by. More a haunted house film than a zombie invasion film like The Gates of Hell and The Beyond. But on subsequent viewings, I have come to love the subtle deliriums and just bizarre plot twists of The House by the Cemetery. In all three films, there is this kind of unseen chaos, inflecting the film and the viewer. The characters move through the films like they are lost in some foggy haze, and the films end with a shocking bewilderment rather than any kind of finality. The human body is not the only thing on attack in these films, it’s as if the zombies are carriers of a primal chaos, attacking both reason and narrative. At the end any of these films, you are left in a place of dark confusion, slowly you realize that in fact, you the viewer, were the one that was under attack.

Fulci first burst onto the horror scene with what may be his most famous and influential film, Zombie. Fulci takes Romero’s undead apocalypse scenario from his Living Dead series and brings it back to the zombie’s genres roots by taking place on a secluded tropical island, paying subtle homage to films like White Zombie and I Walked with a Zombie. Zombie is maybe the most ‘pure’ zombie film alongside Bianchi’s Burial Ground. You show up for outrageous gore and shambling corpses, and the film outright drowns you in bodily corruption and death. Zombie is an unimpeachable classic of the genre and not to be missed. Also, I must recommend a more obscure Fulci film that deserves a second look by horror fans. And that film would be The Black Cat. A clever homage to the stories of Edgar Allan Poe, The Black Cat is a remarkably fast-paced, suspenseful murder mystery, which is a definite departure from the surreal zombie films he is more known for. To anyone who thinks Fulci is a hack who could not direct a mainstream horror film with a more recognizable plot and realistic characters, I urge them to watch The Black Cat. The film follows the general plot of Poe’s story, a man, who may or may not be a murderer, is under attack by a malefic black cat. The black cat may be some kind of demon or may just be the paranoid delusion of a tormented mind. And something that I found absolutely charming about this film is, the black cat that is featured in this, under a backdrop of sinister music and growling sound effects, is a delightfully beautiful cat who seems more interested in preening for the camera and looking gorgeous then actually trying to look like an evil cat. And the cat has a ton of screen time, every second outshining all else in the film.  While the film is a dead serious horror film, the cat is so damned cute that it steals the show. It’s so cute that you would be tempted to take it home, let it into your family, where it will haunt your every move, and trap you in its sinister manipulations. I think that may be the paramount thing to understanding why Fulci’s films work so well, he was a director who knew what the audience wanted, he knew who the real stars of his films were, whether black cats or undead zombies. He made horror films for horror fans, he would deliver exactly what you wanted, and leave you trapped in its nightmare.