The Unearthly Beauty of the Cinematic Other After watching Alien: Covenant with a friend, we got into the usual conversation people have following film viewing, what was good and what was bad about it. He hated it, thought it was full of bad acting and nonsensical plot driven decisions. Which it is. But then I argued that the film had merit. It did contain some rather startling and brilliant imagery. My positive review was pretty much based solely on the scene down in the underground chambers, where David summons one of his alien offspring to come forth. It stands straight up, a disturbingly blank white face dripping with crimson blood. And David looks at it like a father or a mother would, with pride and maybe even a bit of tenderness, and whispers about how you must blow on its nose, to earn its trust. It is just such a strange and bizarrely intimate scene. That is a scene that will live forever in my mind. The rest of the film may not be that great, but what do you do with a bad film that contains a moment of absolute beauty and perfection, that many great films try for but just miss? Similarly, I also love Alien: Resurrection for the scene where Ripley is carried, coming in and out of consciousness, in the arms of a Xenomorph, like a sleeping lover, into that pit of flesh, tentacles, and other biomechanical protuberances. There she is swallowed ever so slowly into the maw, her face enraptured as in a dream, as if her cosmic destiny had finally revealed itself. The rest of the film is barely watchable. But that scene stands with the first 40 minutes of the original Alien as filmic masterpieces of cosmic mystery and perverseness. 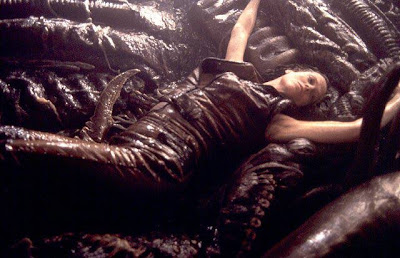 This kind of beautiful imagery trapped within a low-rent film is not limited to the Alien series. It seems to be almost a tradition in the science fiction film. Who can forget the hairy long-tongued monster from The Brainiac carrying out his foretold doom? The invasion of evil crawling brains from Fiend without a Face? The hypnotic alien with a vaginal face bringing the end of the world from Goke: Bodysnatcher from Hell? All those films have these scenes that seem lifted from some odd fever dream. I would say that the Alien franchise certainly contains less campy fun and offbeat imagination then films like It Came From Outer Space or The Mysterians. But even in big-budget science fiction, the bizarre and dreamlike image can still be found.